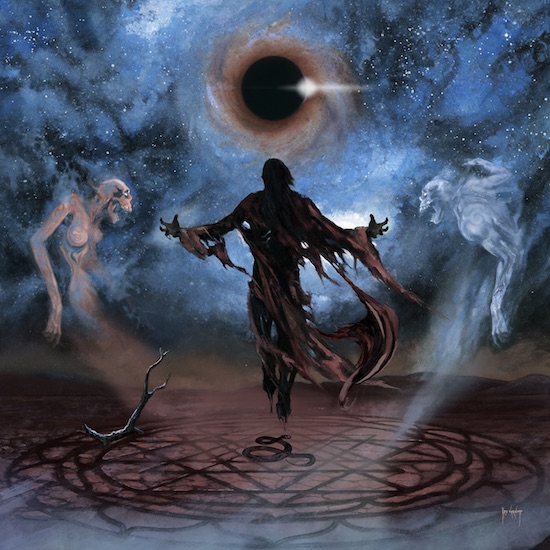 So, US black metal band Uada have been the talk of the town recently. A lot of people (myself included) see them as band with enormous potential and so much going on, others just callously dismiss them as a Mgła clone, which has been repeated so often it's basically a meme by now, when the only similarity is how both bands use black face concealing parkas instead of corpse paint. However, focusing strictly on the music and lyrics, Uada have carved their own sound and identity; speedy and complex melodic black metal with tinges of atmospheric black metal and a dark pagan angle, their sophomore album Cult of the Dying Sun pretty much established them and 2 years later, they come back with Djinn, which is not only a worthy follow-up to that second record, but is also the best Uada album yet and its definitely high on my personal best albums of the year list.

The band had already found their stride with Cult of the Dying Sun and not only do they continue that style but have branched out and refined their music to new heights. The album opens in a surprisingly punky way with the title track, the relentless speed and layered guitar work of the band’s masterminds Jake Superchi and James Sloan shine brighter than ever. The bass work of veiled main man and relative newcomer to the band Nate Verschoor not only matches the guitars but is a major standout throughout the album, and the drum work (according to the band’s credits former member Josiah Babcock recorded the drums though the band’s current drummer is Elijah Losch) completes the band’s sound with both speed and aggression but also finesse. The drum work is near flawless, seamlessly switching from blast beats to punk and even progressive fills and rhythms. Not to mention Jake Superchi’s trademark howling growls and screeches. If there’s one thing that makes Uada stand out is definitely Superchi’s vocals; the man sounds like a werewolf mid-transformation in the middle of a pagan moon ritual, and he also dabbles in spoken work with ominously precise effect.

With Djinn the band have accomplished making a full album experience, while also succeeding in each individual song being able to stand on its own. The anthemic hymns 'No Place Here' and 'Between Two Worlds' show the band’s ambition and sheer talent as a unit. This is where they display an infectious 1970’s hard rock groove and prog rock vibe without any form of extra embellishments in the production or samples, as the band still proudly affirm themselves as a black metal band. In tracks like 'The Great Mirage', 'In the Absence of Matter' and 'Forestless' the band display a combination of classic heavy metal riffs and even some punk hooks; the melodic and atmospheric side of the band’s music is what holds all these seemingly disparate influences together. The aforementioned 'The Great Mirage' and the monumental album closer 'Between Two Worlds' have a ritualistic atmosphere in key moments, which are then followed by their excellent melodies and riffs. On paper a melodic black metal album that combines elements of classic heavy metal, punk, prog rock would sound bad, but the band’s execution makes it work. Overall Djinn is an ambitious and anthemic triumph for the band. With Cult of the Dying Sound they were able to find their own sense of identity, and with this album they successfully crystalized their sound and vision with enough room to keep evolving.

However, while the band has definitely proven themselves to be more than just another melodic black metal band and have displayed just how talented and passionate they are, there’s but one issue that the band faced in this album and that’s the production, which is extremely loud and somewhat unbalanced. Uada definitely benefited from a polished production as heard on their previous record where everything sounded crystal clear and great, in this album, the overall production sounds good and all the instruments are audible, but there’s a noticeable emphasis on the guitars and bass, which are overexposed in some areas. The drums are pushed back for the most part and sound very echoey, in some track this effect works, like the atmospheric parts of the longest songs, but in the shorter tracks where the focus is on speed and melody they sound too distant. The same can be said for the vocals which are soaked in reverb, again, in certain parts it works phenomenally well, but in other parts they sound too loud or not loud enough. This is what I mean when the mixing seems unbalanced, as some parts sound better than others, and its very noticeable given the cleaner production. The final issue with the production is how overwhelmingly intense it sounds. While this is an excellent album with great music and outstanding performances, the weird production which overemphasizes certain parts make it too much of an exhaustive sit through. Its not as bad as albums that succumbed to the “loudness war” like Metallica’s "Death Magnetic", but it will be noticeable, even for people who don’t notice this stuff.

Best songs: 'Djinn', 'No Place Here', 'In the Absence of Matter', 'Forestless', 'Between Two Worlds'