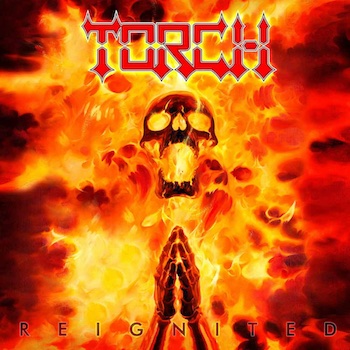 Type: Full-Length
Release Date: September 25th, 2020
Label: Metalville
Genre: Heavy
1 Knuckle Duster
2 Collateral Damage
3 All Metal, No Rust
4 Feed The Flame
5 In The Dead Of Night
6 Cradle To Grave
7 Snake Charmer
8 Intruder
9 To The Devil His Due
MetalBite on YouTube

The creation of good music can be very easy. A muscular riff, an underlying atmosphere of danger, robust vocals and an earthy, unspoilt production – it does not need much more to bring a killer like 'Collateral Damage' to life. This jewel boasts with a riff that Accept do not have any more in their portfolio (because they have absolutely nothing any more, only Wolf H., but metal musicians who love to show their affinity for classic music on stage cannot be taken seriously). However, this song marks the best number on the comeback work of the Swedes.

With the exception of two new songs in 2009, Torch decided to fall into a comatose sleep for the very brief period of 36 years, but now they are back with four original members in their line-up. This amazing rarity alone makes me feel fine, but it gets even better. No, the remaining eight tracks I have not mentioned so far cannot fully compete with the climax of Reignited, but they offer tons of riffs, a cool level of catchiness and natural harshness. Everything is embedded in conservative song patterns. This feels primal and right with regard to the beginnings of the ensemble and the musical socialisation of the musicians. A completely underrated album of Krokus, the energetic "Stampede" disc from 1990, is probably unknown to the musicians of Torch, but it could easily be the older sibling of this comeback.

Not every song hits the mark exactly. 'Cradle to Grave' sounds like a slightly too hard rocker by Quiet Riot or similar wannabes. 'All Metal, No Rust' lives up to its name. Musically a heavy lump, but lyrically almost painfully clichéd. 'Intruder' drags on relatively unimaginatively for 4:34 minutes. But these details don't change the basically positive overall impression left by these nine mostly well-seasoned songs. Anyone who likes and has too much time can, of course, warm up the age-old discussion of whether such traditionally influenced music is still needed in the year 2020. Some will give the album the label "stale", others the seal of timelessness. But everyone should know himself well enough to know which party he belongs to and therefore leave this album alone or not.

In contrast to the atrociously stupid artwork, which is probably the most amateurish representation of the term Reignited ever, the production effortlessly reaches the common international standards. The album has an organic sound and sparks a good amount of metallic clarity. This especially benefits 'In the Dead of Night', a somewhat restrained piece, but carried by very good melodies. Consequently, if you lump all the pros and cons together, you end up with a good piece of old school metal, not spectacular, outstanding or sensational, but by no means frumpy either.