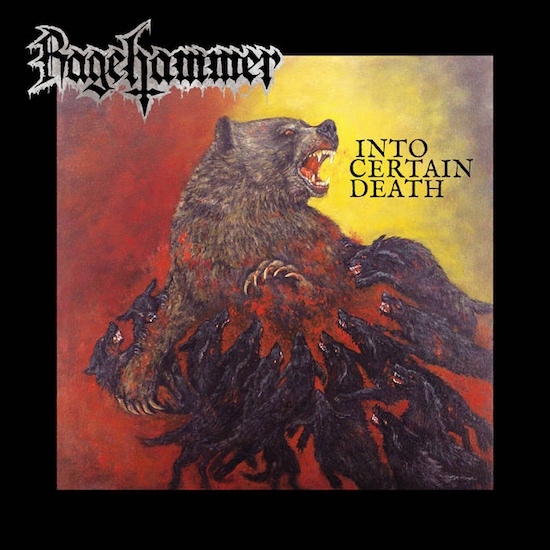 Ragehammer surfaced with their debut in 2016 (time flies…) and here they return with Into Certain Death. The dudes already proved their talent with The Hammer Doctrine and here they confirm it with ten new songs. Programmatic titles ('We Are the Hammer') still show up and the music itself is also aligned with their former works. Ragehammer’s compositions are among these tracks where the borders blur. More or less all types of extreme metal (minus grindcore) flow into the songs of the dudes. Thrash and black metal are the most relevant influences, but this is neither a typical thrash nor a generic black metal album. Only few parts of the material can be clearly classified. The atmospheric first tones of the intro of the opulent closer, for instance, have probably been found at the gates of Blashyrkh, but, as mentioned before, this exception only confirms the norm.

The songs have a lot of drive. Mortar, responsible for the drumming on this album, is constantly active and he loves fast beats. Sometimes his performance borders on blast beats and only rarely it happens that he can suppress his will to destroy. Unfortunately, the snare sounds pretty flat, but more generally speaking, I cannot say that the album becomes a victim of its own production. Maybe the voice is a bit too dominant, but all these details do not hurt the joy of listening. 'We Are the Hammer' creates a strong, straight and compact beginning and the coherent leads of 'Jesus Goat' also have an impact. Believe me, this song consists of 99% goat and 1% Jesus… and it is more or less conventionally designed. This approach leads to a solid degree of catchiness and works very well in 'Peace' which is equipped with an impulsive chorus that drags the listener into the abyss in a matter of seconds. Already this strange hippie with this equally strange Japanese wife knew that it is sometimes a good idea to give 'Peace' a chance – and it goes without saying that this song has absolutely no peaceful sequences. Its first line (“oh the joy of taking lives!”) says it all.

Ragehammer master the art of presenting guitar lines that appear absolutely harsh even though they house a more or less hidden melody. The Polish titled track (forgive me, I am too lazy to seek the necessary special characters) and 'Toxine Fear' mark good examples for the musical understanding of the four-piece. However, Pagan Records have released a homogeneous work and this is both blessing and curse. Ragehammer have found their style, but the songs would profit from five or ten percent more individuality. Once again, that’s no big deal, just a small footnote. The same applies for the useless background vocals at the end of 'Omega Red' which are responsible for the only really weak moment on this album. So what? Into Certain Death presents 46 minutes of music and 45 of them are simply smashing. Even the final songs, the vehement 'Dragon City' and the heroic Deströyer 666-influenced closer which gets more and more intensive the longer it lasts do not picture a band that runs out of breath. Thumbs up for these dudes – they really swing the hammers ragingly.