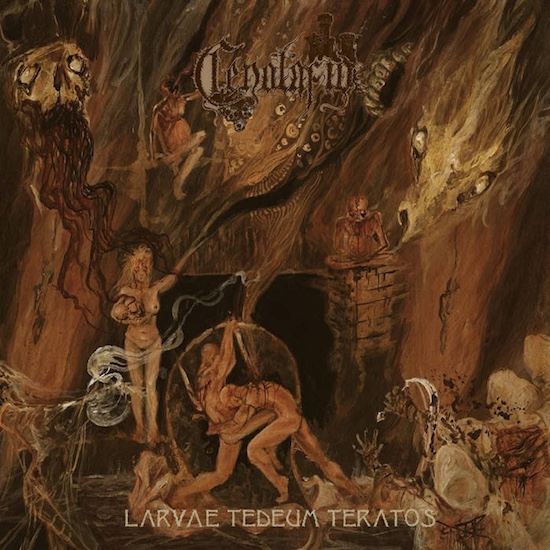 Sounds like you're being stalked and watched while listening to this menacing piece of black/death metal by the Chilean duo Cenotafio. Larvae Tedeum Teratos is their second full length album following some in-between work and it’s easy to hear why it’s being issued on vinyl through Blood Harvest Records for the first time since its original release. This album is vicious, yet simultaneously, hauntingly eerie; best put, it sounds like the soundscape to being tossed into the lowest most frightening and murderous regions of hell. Coated in a feeling of discomfort, Larvae Tedeum Teratos reminds the listener that there is a place for damned souls all the while providing lengthy sessions of sonic sorcery.

'La Apoptosis' sounds of a poisonous insinuation, maleficently introduced with the sound of burning pyres, lightning and an ominous downpour of Gregorian chanting. The ritual bells strike and without restrain, Cenotafio's insidious instrumental waves assemble at the helm of all that is black/death metal. Miserable snarls and void-plunging growls battle it out with a turmoil of power-chord driven riffing and drumming that takes the shape of doom, black, death and at times a technical mix of the metal subgenres. Altogether, the 10-minute act conjures a sense of desperation that seeps into the following tracks. This introduction to the ceremony licks the light from the lantern dry and establishes a layer of darkness to the already damningly tainted atmosphere.

Plague winds blow and cursed Gregorian chants see the excursion of a masterclass work of black/death metal under the title 'El Martirio', that pulls the listener further down the maelstrom of madness with a well compressed and compact assortment of tempo changes and varying riff structures that work diligently to increase the musical showcase while being careful to not diffuse the aggression invoked thus-far on Larvae Tedeum Teratos. And as the sounds of blades being sharpened on anvils compliment the taunt of turmoil, 'La Sentencia Y La Plaga' carries on the tandem of rhythmic disturbance that meets its pinnacle on 'Maleficae'. Born of fire, these 4 pieces form the puzzle of perdition, they take from the genres and amplify those things that'd cause you to quake.

The artwork fits this sort of release well and really does offer a decisive visual interpretation of the mayhem displayed on Larvae Tedeum Teratos. And while someone would easily envision the depiction in motion whilst witnessing the compositional fright and ferocity intertwined, he/she won't be wrong to have other deranged artistic landscapes come to mind. This is an album that embodies that feeling of wholesomeness but also welcomes multiple interpretations through its obscurity. Perhaps to the band there would be one fitting theme, however in contrast, there appears to be many meanings to Larvae Tedeum Teratos' musical formula.

Larvae Tedeum Teratos sounds complete and never once seemed to have too much or too little of any select asset. Well-structured and plays with tight technical flare; the interpretation of unholy images flashing randomly somehow seamlessly knitted into a unison texture.