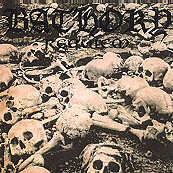 Quorthon died much too soon, no doubt about it, but his musical talent died even earlier. I don’t want to be cynical, nevertheless, all albums after Blood Fire Death were a disappointment from my point of view. Requiem, equipped with a booklet whose print cost less than three cents, bleeds from many wounds. It seems to be created without any dedication, everything sounds cheap and sloppy. How much time took the recording of the 33 minutes long album? 35 minutes? Perhaps even this assumption is already too generous.

Requiem features bulldozing yet clunky thrash with a more or less nerve-shattering production. Quorthon’s voice sounds as raw and as sick as possible. We can be happy that the music does not trigger any emotions, because this vocal performance would kill them in a matter of seconds. Great riffs are conspicuous by their absence. Quorthon strangles the guitar violently and knows no mercy, but everything is done without rhyme or reason. The songs do not lack aggression, yet it is an ineffective aggression. Imagine a struggling child who is not able to hurt the asshole that stole its lolly and you probably get an idea about the kind of “brutality” that Quorthon dishes up here.

The guitar sound is as awkward as it was on the second Bathory album, but back then it was somehow funny to listen to such an amateurish sound. Now it’s just a painful experience. Not to mention the robotic drums that offer exclusively primitive rhythms. In view of this disaster, it is almost surprising that the bass is audible – it would be too much to say that the entire production sucks, but it also does not deserve any praise.

Guys who want to know the number of good songs on Requiem must be kidding. All tracks pass by without any remarkable cool idea or memorable riff. Perhaps one can mention the closer in this context, because 'Apocalypse' surprises with a relatively coherent riff, but Quorthon has put the focus – almost in conformity with one of his classics – on total self-destruction and so it’s just logical that the song’s chorus is more or less going nowhere. Summing up, if you want to listen to a proper dose of angry noise, check this album. If you are not interested in brainless rubbish with sporadically occurring acceptable moments, stay away from Requiem. It lacks integrity, credibility and good music.