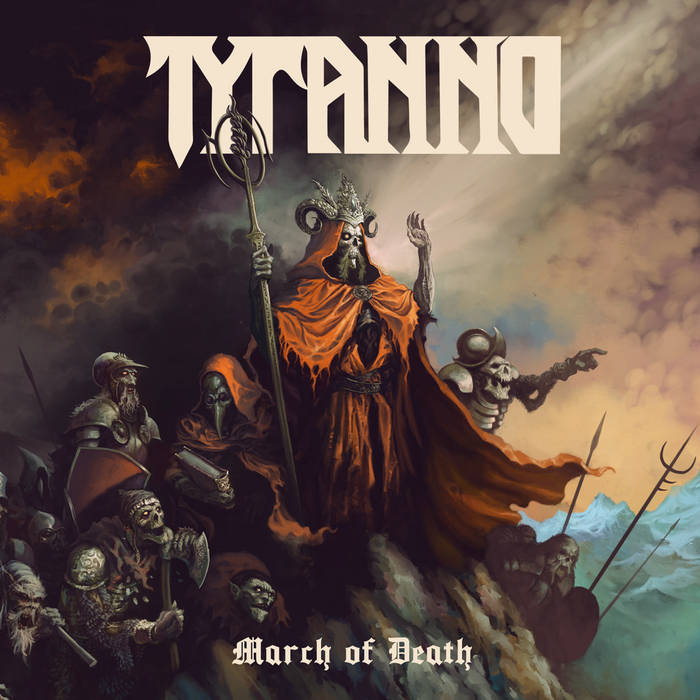 If I'm listening to any thrash metal album for more than 5 minutes, then it must mean that the band is doing something good. My distaste for thrash metal has grown immeasurably large over the years; however, every once in a while, I'm able to stumble across an album that has a chance. Thrash albums that I would recommend usually come from either Brazil or Portugal and today I'm not at all surprised to have found one to add to the family of good thrashing finds and that's Tyranno's March Of Death.

There's more traditional thrash on the album but there's also other influences to be heard throughout the runtime of the record. Celtic Frost in particular comes to mind along with hints of Sepultura (old Sepultura - "Morbid Visions"), you can hear it on 'Cold Embrace', 'In The Dead Hour' and 'Black Death' that also carry with them a black metal rock n roll mid paced attitude. While I would say that the faster songs are more my preference, the slower black n' roll tunes add a dynamic coating to the album and even highlight some of the better song writing on March Of Death.

This is one of those albums that sort of grows on you with each listen. It started with 'Anger' that saw keyboards come to front a bit. Nice touch of atmosphere added to the fabric of the album, almost reminded me of old Mystifier. Then there's that transition that they apply so seamlessly from rocking parts to blasting thrash metal as heard on 'Dead Brain, Living Skull'; such 80s thrash metal sort of titles and the vocal pitch/delivery sells you that feeling easily. At first you may feel as though the band are tiptoeing around, but as the album progresses their projection becomes clearer. By the second listen you look forward to each song in a sense that you become more circumspect and engrossed whilst engaged, a testament to March Of Death's song writing.

Labelling the record as being safe would be inaccurate, perhaps careful would suffice, provided the way Tyranno go about mixing textbook thrash with blackn' roll without compromising that old thrash metal feeling the album adheres to 'Black Star' is just an awesome track, it sounds like a baby between Celtic Frost and Bathory. Probably missing another band in there but those are the ones that stand out the most. And to top it off the deeper you traverse down the tracks the better the music becomes. Their metal proficiencies really begin to eclipse with songs such as 'Praise The Horns', 'Cold Embrace' and 'Black Death'. Undercurrents of melody intertwine with the traditional heavy metal/black/ thrash fused sections.

As a three piece I'm impressed they were able to pull off such a cool thrash metal album. Then again, I shouldn't be, it's coming rom Brazil. If you love thrash/black/death/heavy metal, then this is the album you NEED.