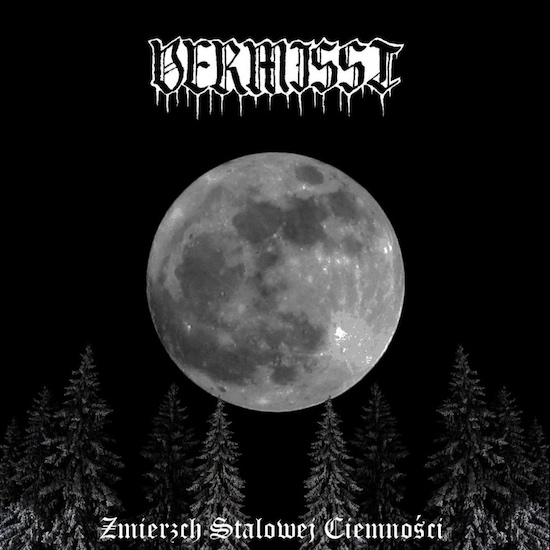 Vermisst's first fuller length record, Zmierzch Stalowej Ciemności, sits somewhere between raw, ambient and synth-driven black metal. Their style is predominantly synth driven but if you removed the keyboards you'd end up with a fairly unpolished, abrasive form of black metal. Quite a few Polish bands have been clinging to the dungeon synth inspired form of black metal that has been garnering some amount of praise by supporters that miss the old and austere sound of the era, hence Vermisst may find much appreciation from this group. Zmierzch Stalowej Ciemności possesses that old dimming candle, moonlit beauty, but also seems to pay homage to the exclusively raw conduct of the mid-90s.

Zmierzch Stalowej Ciemności has relatively lengthy tracks with most clocking in at around 5 minutes or more. However, this record really flies by quickly which seems to be result of the fluent incorporation of the keyboard synth, trance-like pacing and the crafty songwriting. Together they play on the listeners sense of time as you're rarely ever distracted from the sublime gaze in effect. 'Zmierzch Stalowej Ciemności' sets the foundation for the rest of tracks to follow (that utilize keyboards), it has a strong sense of rhythmic direction and the vocals take advantage of that with supporting emotion to fortify it's content. Most tracks follow this example with stern commitment to outdo, thus a very melancholic powerhouse is birthed in the form of 'W Pozagrobowej Przestrzeni' that bundles the serene tempo and milieu of the music with the violent and raging vocal wails.

Following the blissful ambient piece 'Det Skjulte', we are greeted by a contrast, a shift in tonality that sees Vermisst focus on a more primal side of black metal the likes of early Darkthrone. The synth is stripped away entirely, and a less decorated hand is put to work. I would have preferred consistency with regards to the instrumentation, thus keeping the keyboards an active element as it would have given the album a greater composite felling. Either way, the songs are plausible due to how effectively they are able to convey a somewhat semi lo-fi raw black metal temperature. 'Frozen Flames of Misanthropy' through to the final track 'Zimowa Aura Krwawych Cieni' displays a rather competent rendition of early raw black metal that I think most enthusiasts of the subgenre will enjoy. The peaking macaw-esque vocals add an inhuman property to the music whilst the sharp riffing and palpating drumming creates a showy weaving of opposing frequencies. The artwork is very good and the production on both raw and synth ends are commendable. Hence, Zmierzch Stalowej Ciemności is a solid record that captures a certain magic of early 90s black metal under one starlit sky.