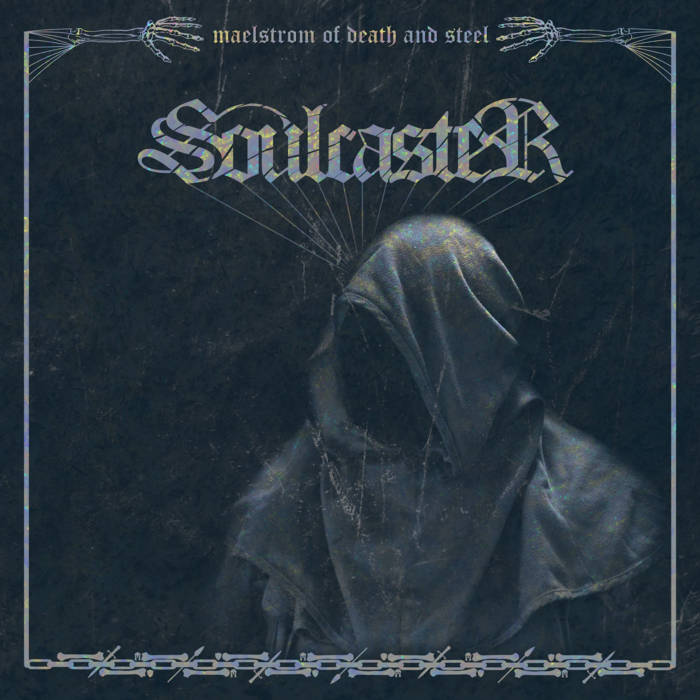 No doubt at all, Dying Victims Productions is a very active label. They have already released brilliant outputs, but every now and then they seem to work on a hit-or-miss basis. Soulcaster’s EP offers sleepy riffing, boring drumming and emotionless, more or less clean vocals. Put these elements together and you have exactly the songs that the actually promisingly titled Maelstrom of Death and Steel houses. The band from Belgium is not able to break out of traditional schemes and neither the melodies nor the riffs have the rebellious touch that metal needs. I don’t say that this is a pile of shit, because the group also avoids severe mistakes. Instead, it presents mediocrity in perfection. Perhaps the band wants to build a bridge to pretty odd formations such as Cirith Ungol, but I do not hear any progressive or unorthodox tones. And I freely admit that I have never been a great fan of the (so-called) cult band Cirith Ungol.

The fourth song almost reveals a whirlwind of emotion and aggression, but only in the context of the remaining material. The predominantly mid-paced compositions come and go without farting, belching or doing anything else in between. Life is a long and silent river, isn't it? Given this situation, even 21 minutes can become a pretty long time. Maybe metal maniacs with a weakness for antique sounds that present a dark touch like to give the EP a try, but I miss the three elements that gave the output its name. There is no maelstrom, no death and no steel. Just mediocrity. Dying Victims Productions have many more fascinating bands in their catalogue and therefore I beg your pardon - I need some "Blutige Seide" from Hexenbrett right now. That's better for my soul.

The result of merging lyrical themes based off the Stormlight Archive by Brandon Sanderson with a classic heavy metal sway and some added goth/punk varnish comes to light in the form of Soulcaster's Maelstrom of Death and Steel. Been hearing some good traditional heavy metal coming out of Dying Victims Productions, so it was a no-brainer I check this one out; and for a debut EP, I must say I'm pleased with what the Belgian band has brought to the anvil.

'Truthless of Shinovar' introduces us to what Soulcaster are capable of. Its immediately noticeable they have some admiration for the Gothic/punk metal style through the vocals used. Yet they also have an epic sword and sorcery approach attached to them. Mostly mid ranged with some cool highs and a dark sheen that persuasively still keeps within the confines of the heavy metal genre. It’s the standout aspect Soulcaster are able to sell you on Maelstrom of Death and Steel but that's not to say it’s the only highlight worth mentioning.

'The Wretch' is probably my favorite off the EP sitting right next to 'Shardbearer'; it has a smooth and relaxed rock and roll vibe in the main riff and the catchiest chorus. An epic feel is also active on this song, mainly due to the accentuated vocals on the final chorus and the showman soloing.

'Shardbearer' on the other hand has a bit of a darker tonality mixed with a progressive feel in song rhythm and structure. Guitars are a bit more in your face and battles with the technical bit of drumming both in the chorus of the song and soloing departments. Nice to hear the drumming break route from the more predictable passages to something more rewarding and challenging. This gave Maelstrom of Death and Steel a much-needed shift and level up in songwriting in turn speaking highly of Soulcaster's musical awareness.

The production is ideal for Soulcaster's playing style and the dark yet epic tone they are able to wield. It’s clear and has a late 80's appeal that suits the gothic/punk vocals and also facilitates a place for the guitars to really soundoff; so kudos to the mixing and mastering crew/individual.

The EP concludes with 'From Abamabar to Urithiru', the longest stretch on the album just by a minute or so and the most epic song of them all. Soulcaster really step out more confidently by incorporating speed metal riffing and drumming following the doom metal-esque unveiling at the start of the entry. The standard of the riffing is maintained with added flare in the faster sections, while the drumming and vocals take advantage of the increased musical velocity that through its rhythm, holds up to an epic/speed metal branding.

Maelstrom of Death and Steel as a complete scroll, has the workings of a band sure about where they stand and where they would like to be in this revived traditional heavy metal era. Definitely a good album that promises better for future spells.