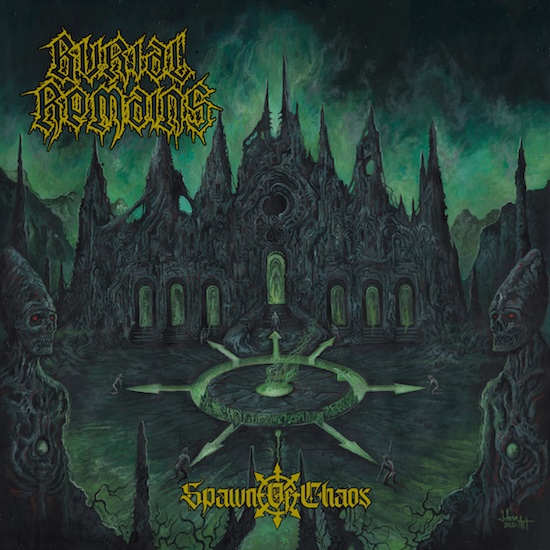 Continuing where they left off in 2019 with Trinity of Deception, Burial Remains return with their sophomore full length album titled Spawn of Chaos. Their debut album was a decent run that showcased significant potential to take their music to the next level, thus the expectation of improvement rode heavily on this newest installment. With Trinity of Deception, Burial Remains surely put on a promising overall showing; however, they left a bit to be desired mostly in the riffing department. Hence, the big question is: did they deliver in Spawn of Chaos?, the answer is both yes and no.

My biggest gripe with their previous album had to do with the lack of guitar solos, that if utilized often, would have seen the album go from being a good debut to a frontrunner of 2019 within the genre. I had hopes that Spawn of Chaos would rectify that issue, instead this sophomore exacerbated it. Here's the problem, Burial Remains' melodicism became stronger with this album, which resulted in a far greater need for guitar solos than on their debut album. The only track that even attempts to implement the feature is ’As Darkness Shall Reign', that mind you, does so half-heartedly. There's no real commitment, instead the idea is poked-at momentarily, and to make matters worse, any attempt to do so is rarely revisited for the duration of the album such as on 'Spear of Destiny' that is (for me) the best song on Spawn of Chaos.

This absence would prove problematic as you make your way down to 'Where Death Begins' and 'At Dawn Came the Shadows', both of which exhibit significant improvement in Burial Remains' melodic song structures and lead guitar work. However, because the melodies are so potent, the songs cry out like sirens for guitar solos to truly exploit and finalize the music. The absence of such quickly becomes a thing of much frustration with tracks like ’Slaves to the Cult' and 'Swallowed by Sulphur' sporting 4+ and 5-minute runtimes. Instead of using the middle section to further solidify the tunes, rhythmic transitions are introduced to compensate for the lack-there-of, that while effective to some degree, comes across as filler. You can tell the band are avoiding solos and it sort of places a question mark over the material and Burial Remains. Like having a car move through all its gears, but never produce enough horsepower to hit its top speed in the most favorable conditions, the feeling is quite underwhelming especially when you know its capable of going above and beyond.

Not to be worried; the positives on Spawn of Chaos are as conspicuous as the downfall, that helps to save the album form an entirely negative summary. The production is a lot louder than on Trinity of Deception, thus giving the buzzsaw riffing an intimidating and often times imposing aura about it. To match such is the afore referenced improvement within the riffing department. Melody is evidently a greater factor particularly in the thrashing sections of the album, with 'At Dawn Came the Shadows', 'Legions of Death' and 'Spawn of Chaos' exhibiting a flurry of rhythmic fireworks in their main riff/leads. Along with the booming growls and attractive cover artwork, these features as a team helped the record over the finish line to earn respectful podium finish despite having a threatening infirmity.

It would be great if Burial Remains could transfer the good about Spawn of Chaos and apply it to the album's follow up. Their overall song writing has improved yes, but it’s an improvement that has changed the call for guitar solos form a good asset to play with, to a necessity. Nevertheless, I enjoyed this album so much that I can't count the amount of times I've listened to it thoroughly and I believe most connoisseurs of Swedish death metal of the mid 90s will too.