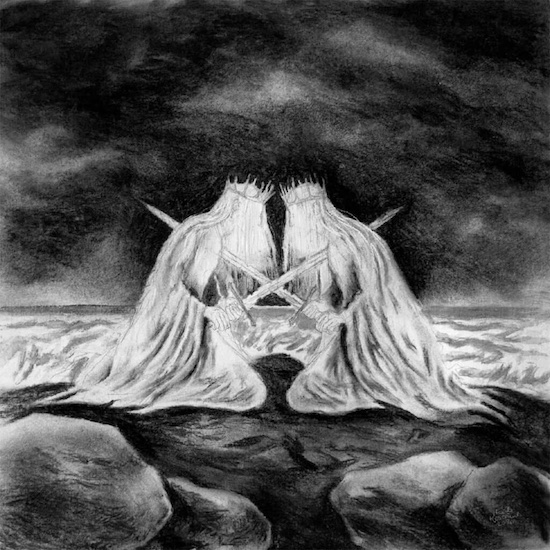 Many black metal diehards at some point in the last 2 to 4 years have sung the praises of this Finnish pagan black metal outfit known as Havukruunu, receiving an amount of hype on the same level as bands like Misþyrming and Mgła and for a very good reason. Havukruunu continues the well established tradition of Finnish black metal, sorrowful melodies and a dark atmosphere and fast riffs, however, where Havukruunu excels is in living up to the “pagan” label and adding unique elements of Finnish folk music, classic heavy metal hooks and the ever serendipitous influence of Bathory in the more Viking and pagan epic sense and scale. After 2 outstanding records displaying all of that, Havukruunu have returned with their third opus, where they now show the maturity and refinement of their unique sound.

While Havukruunu can easily be labeled as 'Finnish black metal' (and they certainly pay tribute to the progenitors of the regional subgenre like Horna and Moonsorrow), they are more than just their influences. The first aspect of what makes them so unique is the scale and atmosphere of their music. Havukruunu discard the frostbitten grimness of Finnish black metal in favor of the epic scale and grand atmosphere of Viking/pagan metal; the riffs, melodies and solos are fast and aggressive but have a classic heavy metal catchiness to them that’s not only pleasant and enjoyable, but very empowering. Powerful and epic is how I would most definitely describe the music as a whole. It is a powerful album, it evokes the feeling of a battle at the seacoast in the middle of a harsh winter, and this overwhelming feeling is accomplished through the guitar playing of founding members Stefan and Henkka is awe inspiring, being able to balance the rawness, intensity and grit of black metal with the aforementioned folk driven and classic Iron Maiden-esque melodicism and riffage, their neoclassical style solos are also a nice bonus. The rest of the performances by bassist Sinisalo and drummer Kostajainen are just as impressive and their job on the rhythm section serves as the backbone of the music in all the right ways, being able to match the sheer musical onslaught of the dueling guitars.

And of course, while there’s a lot of bold and wild experimenting on the band’s part, this is still a black metal record and this is shown in spades by Stefan, he’s not only an outstanding guitarist but also a fantastic howler. And indeed, he doesn’t shriek or growls, he howls across each and every song with force and appropriate echo, his vocals are what gives this album that unique powerful feel not just with his harsh howls but also in the clean vocals section, the bellowing clean vocals that are peppered throughout the album are where this album is at its most Viking or Finnish folklore like spirit. The opening title track encapsulates the overall experience of the whole album; the booming vocals create anticipation before the entire band brings down the thunder in spectacular fashion. In my previous metaphor I mentioned how the album feels like a battle during winter, and Stefan’s vocals push that atmosphere even further.

The album is also surprisingly consistent and even varied. Each track is unique and stands out in its own right while also contributing to the album being a uniform experience. The album opens strong and ends strong, and to me that’s what makes an album 'great'. When you can enjoy the last song of the album as much as the first track that’s when you know this is a not just a good album, but a great album that never loses momentum and i believe the best albums are always the ones that keep a consistency in quality from beginning to end.

That sense of consistency is also punctuated by the pitch perfect production; Stefan is the heavy hitter here, aside from handling guitars and vocals, he also handled the lion share of the production and he was able to make this album sound as great as possible. It’s polished enough where the non-black metal influences and elements shine while also keeping the intensity of all performances and leaving enough rawness in the sound to complete the signature Finnish black metal atmosphere. Overall Havukruunu succeeded in all the right ways and have managed to continue refining their sound and style. With all that said, I do have to nitpick a bit and point out how the band is still treading familiar ground with their sound, while I have made a good case in explaining what’s great about Havukruunu’s sound, this would serve great as a closing chapter in this epic trilogy of albums so that the band can go into brave new worlds. Another lesser aspect to point out is that while the band still counts as black metal, some more devout followers of the subgenre, particularly of the Finnish sound may say that the album will come across as a bit too “cheerful” and while yes, the sound has more in common to Manowar than Behexen, this album and band as a whole makes a good case in expanding black metal beyond the dark woods of Baphomet into the heat of glorious battlegrounds of Týr.