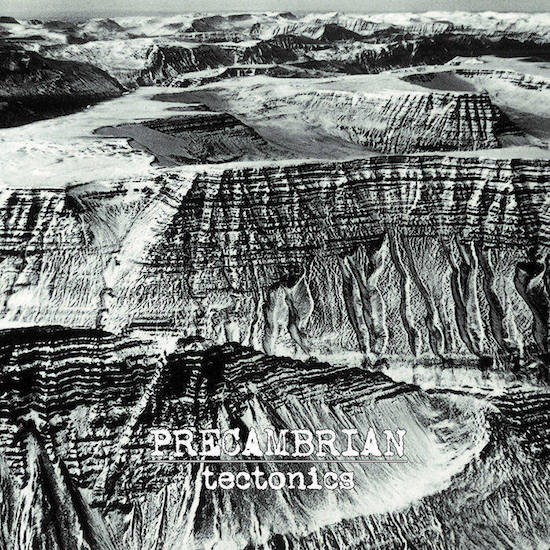 The Ukraine currents felt in the underground have managed to form by means of platonic movements the disturbance known as Precambrian. Evidently a black metal band of the fiery kind as far as their music is portrayed, however, their themes are not those of the traditionally praised. You know, the bombarded occult literature and songs of the beloved adversary; instead, Precambrian dedicate their effort to the earth a time before mankind appeared on it. Interesting enough, this is the kind of music one can stand behind in support-of given the intellectual angle it operates at. And as an added bonus, those who once had and have influence in Drudkh, Blood of Kingu, Hate Forest and Windswept, spearhead this monstrous shift taking place over the span of 5 sessions, Tectonics.

Be absorbed, as a crustacean or mollusk would to the aquatic immensity we call the ocean, let the churning of fossils, soil and the earliest forms of life within the earth transport your senses to a resounding clash of hostility that would go on to birth the landscapes we see today.

For those of you familiar with Windswept's "The Watcher", or any Hate Forest material, it will not be long before you come to recognize the vocal scrape of Roman Saenko and the light bending, uncompromisingly consistent fast drumming of Vlad. However, where Windswept applied a bit more melodicism, melancholy and friendly rhythms, Precambrian goes the opposite route and utilizes a heavily distorted, almost grazing guitar technique that does well in conveying the rearranging of the soil as it were, in turn conjuring sensations of awe and bewilderment. Such as on the track 'Volcanic Winter' that sports a collection of frigid sweeping landscapes conveying feelings of overwhelming insignificance when contemplating the obelisk of geological architecture. This is the meat of Tectonics, the very essence of the monstrance portrayed on the album that comes to life and engulfs you.

Another thing to take note of is the tonality of the music here; ‘Archaebacteria', being the first installment, arrives with a menacing milieu. It is at the very beginning a synchronization of sounds that take effect in molding Tectonics. The violent vocal delivery of Roman matched with the visceral drumming of Vlad and penetrative overcasts of mean yet rhythmically addicting tremolo licks rub against each other like sandpaper to wood, until the finest grains of this friction, fall and morph into something as eternal as time itself.

The songs here pass ever quickly, leaving you in a gaze after being showered by gushing drum and riff harmonies, all the while explosively casting vibrant depictions of such a phenomenon that'd spawn super-continents.

Thick with trance amidst the turmoil, 'P-Tr.Extinction' further tightens the sonic shackles as you're completely enveloped by the raw intensity that retains some detail for the listener to bask in the cymbal technics and riffing tremolo torch expressed. Precambrian easily convey an era in which a multiplicity of lifeforms was being wiped from existence during this time frame some 252 million years ago. The relentless blast beats, harsh vocal clamor and sagacious riffing account excellently for this Great Dying and eventually the scope and magnitude of Tectonics.

An album truly designed for the black metal aficionado and enthusiast of natural architectural beauty.