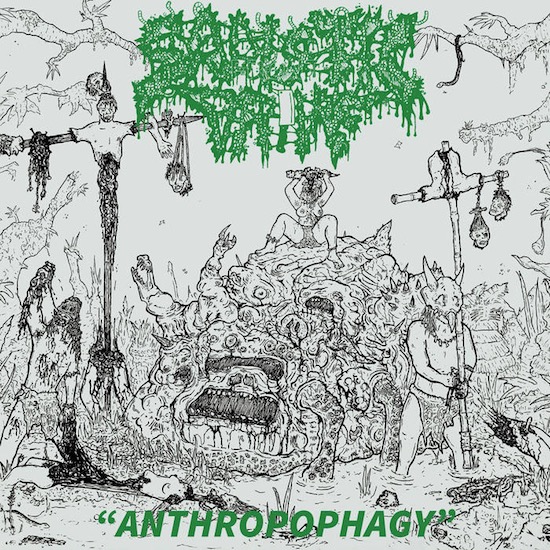 Something special happens when traditional death metal and grindcore merge; can't put it into words but for brevity let's say the results and final outcome are just incredible. Finland are no newcomers to death metal, heck they pretty much are the head honchos for old school death/doom so I would have expected no less in quality from the band in discussion today and more so the album they just shat-out from the bowels of the region. Anthropophagy is Sadistic Drive's first full length album following a compilation put out in 2019. 'Nasty shit' as someone I know had described the material when asked their thoughts after referencing Anthropophagy. Spot on description of the music waiting to blemish your white shirt and matching pants; Anthropophagy sounds like human waste running through and pouring out of your local underground sewer-system. Sick, ugly, just yuck........

I'll keep this one as short as I can to avoid puking on myself. Anthropophagy offers 10 grotesque pieces stinking with the canker of years old decay and from the time the first stick is thrown unto the drum kit and the first riff pours and the first vocal note is belched, the message arrives with sound clarity that Sadistic Drive have every intention of not just living up to their band name but offering music that is reminiscent of the death/grind scene around 89-91. First menacing piece comes in the form of a track called 'Serial Cleaner' following its opening spoken sample; and indeed 'one by one' it got us all. Falling over like a nerd for the hottest looking (disease riddled) chick in the class that has been fucked more than the american taxpayer by every guy and his granddad, this tune has got the curves, the tits, ass and hole death/grind possessed at the dawning of its era. Guitar licks that smear the slush, vocals that sound as though someone is regurgitating soup spoilt for a week and drumming that sounds like some sicco is splashing around jovially in liquefied defecation. This track brings the ugliness of the era and it only gets better as time progresses.

'Internal Putrefaction' and 'Acid Vomit', two more twisted yet delicious death/grind tracks, short and to the point as they should be. No filler, just serious, hitman-style work conducted on the listener. Lots of groovy transitions, mid-paced to high-octane, uptempo blast beats and riffing both memorable and craze inducing. The vocals are dynamic to a degree whereby a sort of snarl would be used in connection with a deep guttural and mid-ranged yell. Some parts on the album are also very sporadic mainly in the faster grindcore moments such as on 'Worm Eaten Abomination' (in which you also get a bit of death/doom) and 'Disease Ridden Pervert' that features my favorite drum section on the album nearing its end after that sinister bit of laughter.

Because the tracks are so short you're kept at the height of interest provided there's always something there happening that is different. Heading down to 'Ferox (Victim of Anthropophagous Tribe)' and 'Body Part Puzzle' it becomes hard to not want to play Anthropophagy again due to so much being tossed at you within this short 27 minute span. Plus those two songs exploit the momentum of previous highlights that in turn manage to bring the album to a worthy conclusion. Probably heard Anthropophagy more than 10 times in a single stretch and still finding new stuff there every time. One of 2020's hidden gems; or in this case, hidden germs.