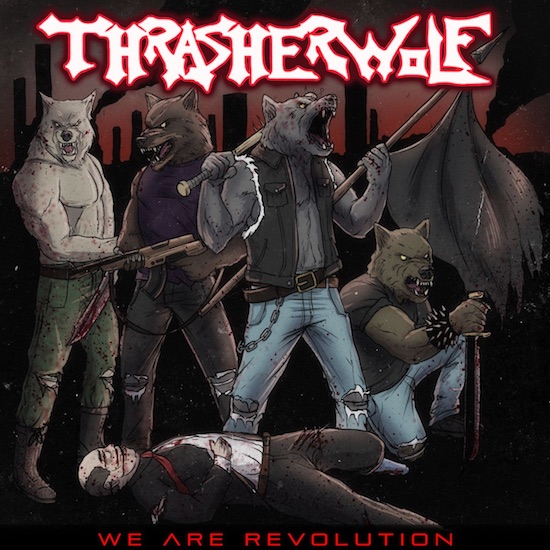 The Brexit has become reality. I am therefore all the more glad that the dudes from the British island still take part in the European thrash metal scene. Xentrix have returned with a vengeance, Onslaught released a proper work and now we are confronted with Thrasherwolf. Their promo letter is full of stereotypes, the name of the band, the title of the album and the artwork also do not give some reasons for hope. But far from it! The quartet practices typical British understatement. Just like their politicians of the last century, the dudes love to disguise themselves as idiots, but at the end of the day, they have won the war.

Thrasherwolf is another formation that celebrates old school metal – don't be fooled by the album's title, the music is free from revolutionary, innovative elements - with a modern yet appropriate production. The song material sounds sometimes a tad fiercer than that of Xentrix, but almost melancholic and thoughtful pieces like 'Ruin' show another facet of the group's approach. Whenever the band accelerates speed, the most violent tracks of Onslaught deliver a good point of orientation. Highlights like 'Vortex' have absolutely everything it needs to blow the daily shit out of my head. Thunderous, sharp and precise riffing, a lead vocalist who conveys a rebellious touch and powering drums - all these building blocks rely on the voluminous mix, while a manageable number of tempo changes leads to a neck-breaking mid-paced part in the midst of the song which reminds me of the intro of Onslaught's "Let there Be Death". Thrasherwolf, I want more!

It's amazing to see the ambitious way of proceeding of the band. Eight songs and an intro add up to an album which clocks in after 52 minutes. No doubt, it needs courage to present a number with a playtime of almost twelve minutes as the first regular song. But Thrasherwolf know what they are doing and this means that no track is just a demonstration of technical skills or only a high sophisticated compositional pattern as an end in itself. To form a coherent song is always the aim of the wolves. This is not to say that they are totally immune against a few less strong parts. The integration of a pretty melodic part in the fifth track appears to me like a fairly failed experiment. By contrast, the four-piece achieves its top form whenever the guitars rasp, slice and injure in a ferocious way. The quality of 'Vermillion Steel' underlines this statement.

All in all, there is definitely still room for optimization, for example in terms of intensity and velocity, but nobody's perfect. Don't forget that these dudes are still at the beginning of their career, if we want to use this pretty big word. They have the potential to make their way and so I hope they do not also become experts in exiting, but show their stamina and the further improvement of their already well-developed abilities. In a world where no day goes by without a new "sensational" black metal band jumping out of a Finnish lake or a South-American swamp, pure thrash is always welcome.