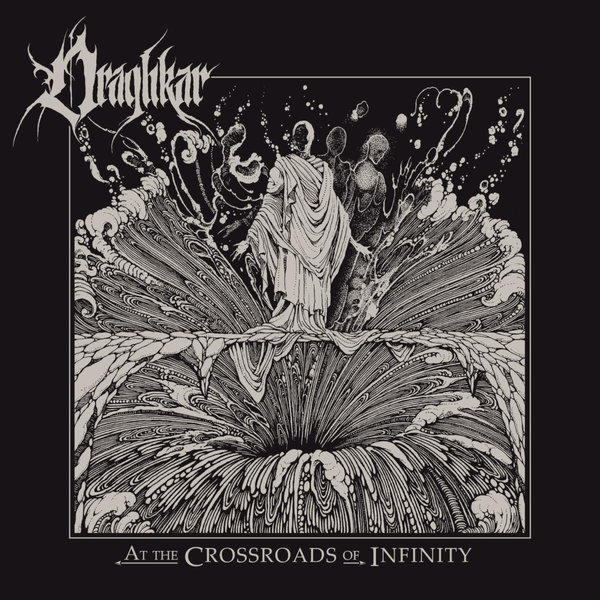 Once in a while, a band comes along that sounds as innovative as their genre’s progenitors were, while reaping the benefits of modern quality production. Draghkar is that band! It’s as if Morbid Angel, Gorguts and Necromantia debuted today. Classic, yet brilliantly fresh. I can’t put this album aside!

Lead guitarist KS Kuciemba flings multiple mind bending solos all over the place. I especially loved 'Beyond Despair' charging out of the gate that way. Haven’t heard guitar solos that sound so truly chaotic and evil since "Altars of Madness"; the difference being Draghkar’s superior audio quality highlighting KS’ work much better here.

Phil Segitho’s drums also benefit from the first-rate recording, and we should be thankful for that! He actually brings more to the table in the slower sections, like to open the two longer songs 'An Erosion of the Eternal Soul' and the title track. Personally I find his varied command of all pieces of the kit to feel heavier than the speed-centric snare abuse that categorizes the genre too often.

At the Crossroads of Infinity is not all about modern sound though - a classic feel is very much present here with Brandon Corsair’s rhythm guitar work. He brings that great early 90s “buzzsaw” sound which makes Draghkar sufficiently rough for underground cred. Album opener 'The Final Death' is my favourite example of this new-yet-old effect.

Cameron Fisher’s bass playing is another absolute standout. On 'An Erosion...', he builds up from a crushing grind that perfectly explains the song’s title; then switches to a gallop that fiercely duels with Corsair’s rhythm guitar. It’s rare that I find a bassist to place alongside the greats of Greek black metal, but Fisher can match Daoloth any day.

Vocals are mostly done by Daniel Butler, who sounds like Luc Lemay but with deeper lows and a better high end range too. Corsair also chips in with some atmospheric and creepy clean passages to start 'Seeking Oblivion' and finishing off 'The First Death' and the title song.

At the end, what more can I say about At the Crossroads of Infinity but to thank Draghkar for revitalizing my enjoyment of death metal, that had been flagging of late.

The end of time, the end of existence, and the end of reality can be seen as a common experience, something that we all share as a species. However, it is reduced to a subjective point of view, no matter when, how, or where; we are all condemned to stop breathing. Lyrically, Draghkar's first full length, At The Crossroads Of Infinity gives us some insights about death as a universal experience, as a cannon for existence; the undeniable truth. Death metal can be wrapped up in different packages. The unintelligible brutal death metal, the more careful and clean executions of tech and progressive death metal, and also the occult death metal. I think musically Draghkar falls into the last label I mentioned because what you feel when you listen to their debut record is a veil of mystery full of murky and dismal atmospheres that engulfs you into a dark catacomb of endless corridors of madness.

What caught my attention when I first listened to the record was the clear yet muddy production values that are imprinted here. The instruments sound clear enough, the bass sounds thick and punchy, guitars are sharp, melodic, and transcendental at times. However, the production gives you a feeling of archaism, it is like you're listening to something otherworldly. That's the veil of mystery I’m talking about, you hear pure death metal but at the same time, there are occult and obscure elements that effectively blacken their music. The death metal executed in Draghkar's first full length is galloping, rhythmic, ghastly, and arcane. The album starts with 'The First Death' which in my opinion is a clever move due to the catchiness of the riffs and also because of the dark choruses placed by the end of the track. It's the perfect blend of aggressiveness and obscurity, I like my death metal to be violent but also desolated and eerie. Be forewarned, this is pure underground music; if you are looking for cinematographic atmospheres and children chorus bullshit as in the latest Behemoth, go elsewhere. The record feels authentic in the way that it does not have a direct sound that you can reference, nor American death metal or European. I'm not going to say the typical bullshit most reviewers fall upon; “This band sounds like Morbid Angel, Death, Entombed or Dismember”. I can relate the sound of Draghkar to the one of a Greek band called Soulskinner, especially in their record “Crypts of Ancient Wisdom” in which they trademarked a Hellenic death metal sound. A unique and uncanny death metal sound that few dares to perform. Tracks like 'An Erosion of the Eternal Soul' and 'Seeking Oblivion' can be the proof of the sound I'm describing, slow, ceremonial almost doomy sections mixed with rhythmic and violent esoteric passages.

In the end, Draghkar stands in the middle of the road of death metal extremes. In one extreme you can find the ultra-fast and guttural sounds of brutal death metal and on the other extreme, you can find the intricate and progressive sounds of tech-death. Draghkar floats in an ethereal cloud of solemnity and obscurity where death is the supreme entity. At The Crossroads Of Infinity is an outstanding first effort from this Californian death metal band. The sun has never shined so black in the Californian beaches and the eclipse seems to be prolonged eternally because this band promises more awesome releases in the future. The uncanny sound is accompanied by a very ad-hoc cover art in which the occult elements displayed in the whole album concur into one; only death is real. Recommended album if you want to get into a more unique death metal sound.