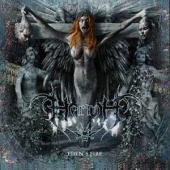 Art, the soul of nature.

Christ Agony, Lux Occulta and now Hermh, bands of such league represent to me fine examples of dark necro[ro]mantic blackened metal art. After putting out tasty, mostly cover songs 'Before Eden' EP, brand new Hermh's full-length album is a follow up release and very strong proof that the band's come back is for real. Some of you may know that the sole remaining persona in Hermh is the running wild beast named Bart. This time he asked guys from another quite good band, Abused Majesty, to help him out with creating new material. His-story here is a development of once begun specific theme concept [look at the cover as a hint].

I wish everyone could see these 5 steppenwolves on stage along with Behemoth, not only because of similar theriomorphic theatrics, but to experience for themselves band's solid craft.

This is not some senseless, merciless thrashing and pulling of strings. Believe me you can be taken away by waves and waves of melodious flow, up and down flow but without any brakes Socaris' guitar well arranged constant move. Adding to this superly rhythmical material are meanderings, screams, howls, growls, spoken words of Bart, conducting maestro who reveals in his poetics secrets of the Clan of Mradu. Even a caveman knows that in symphonic black metal very important are keyboard sounds. Flumen justifies this notion with his right-balanced play which is not a mere fill-up to the whole. I saw Hal helping Dead Infection with live duties. His thick strings handling, not to mention stage presence killz. As for Icanraz, the stickmaster who just recently departed for Christ Agony, let me ask this: do you think Cezar from Christ Agony would take this guy without realizing the potential?

Look out for a new release coming in 2008 along with a dvd.

Measuring "Eden's Fire" up to Hermh's previous efforts doesn't make any sense cause there are so many changes, including personal and musical that it almost feels like a new band. Different are vocals, guitars, drums, production... If I had to compare them to other releases of this genre I'd say fans of Emperor and Dimmu Borgir circa "Spiritual Black Dimensions" will find a lot to like on this record. Each song has a complex structure and many layers but at this same time maintains a perfect symbiosis between keyboards and guitars, an element that's often overused in today's symphonic black metal. Obvious touch of melody exists on every track but overall music experience doesn't lose its intensity and aggressiveness. Brutal riffs and varied rhythm section that's not limited to blasts only, offer each track its own identity. Bart's diverse vocal styles and forms of expression give "Eden's Fire" almost a theatrical feel and coupled with Flumen's surrounding keyboards perfectly build the atmosphere of the album. It's been 9 years since their last full-length "Angeldemon" and with "Eden's Fire" Hermh jumps right back into the top of the genre. What a way to come back!