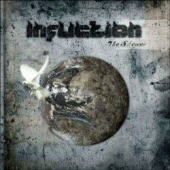 Crossing my desk this morning was a CD from Infliction, a self-described Thrash/Death Metal group from the upper Northern region of Italy, just north of Milan. Not overly intrigued by the cover, something was telling me go ahead and listen to this disk … so I loaded it onto my computer and began to listen to it.

This six man band comes at you like some elite military unit with so many killing tools. Melodic Death, Thrash, Prog and even old school Metal are used and all without any confusion in their intense music or to what they were doing. Infliction seems to have found their sound and just how to use it in an impressive way.

Songs like 'Redhouse' and its infectious thrashy ways that sear into your mind while the total nasty riffage of 'Nocturnal' seems to want to blow your head clear off. Infliction can play with such a great amount of skill and intensity, blowing your mind with every note given and yet there is one problem. The only critique is that the keyboards were over used. They are great when accompanying the music and adding some punch, but always seemed that it got in the way too much when they were trying to make them prominent.

This was a very good album, but if they could redefine the role of the keys to just accompaniment more of a supportive road – this would have been a better way. They do rock, but it loses something with the keys set up like this. Sorry.