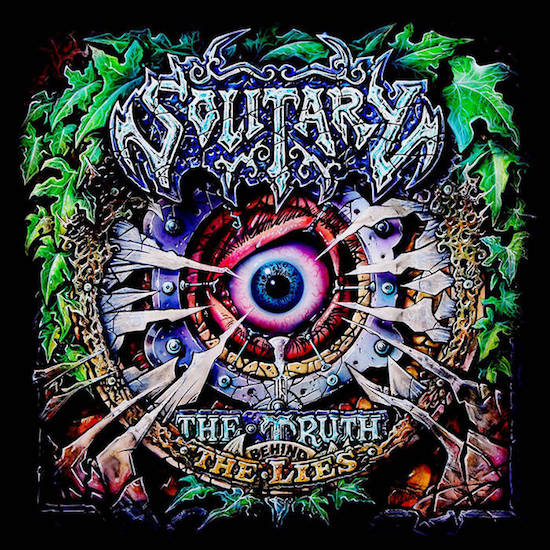 Thrash metal, the elixir that suggests eternal youth to anyone who takes it regularly, is known to come in a wide variety of flavors. Solitary, who send out their noise from the British island to all the world, do not have a distinctive flavor to offer, but that does not necessarily have to be. They stand in the tradition of their compatriots. Slammer, early Xentrix and a few Onslaught reminiscences can be identified in the sound of the band. That is, there is no lack of courage, energy and integrity, while the most extreme areas of thrash are not touched. A powerful, relatively variable voice accompanies the stormy outbursts of rage and excess and there is nothing to complain about the overall picture.

However, the positive overall impression cannot hide the fact that some things could also run better at Solitary. The Truth Behind the Lies sounds relatively little individual for the third album of a band. One would wish the four boys that they also have one or the other idea, which did not exist so far (and which nevertheless fits well to the genre). But since this is not the case at least on this album, the work seems very generic and conventional. Malicious tongues would add "interchangeable", but that would go clearly too far for me. For this, the mix of staccato guitars, pulsating drums and the strong voice has too much substance. Solitary offer aggression and freshness, but sporadically also melancholy and mildness. And yes, their song-writing is not overly original, but nevertheless mature. All pieces have a good flow. You won't find inappropriate breaks here, instead all the cogs mesh together.

The compositional skills of the band members guarantee an album without fillers. By the way, intros, interludes and further gimmicks also do not surface. Not a single song adorns itself with preciousnesses foreign to the genre and I admit that beyond the black thrash niche, representatives of pure doctrine are always extraordinarily likeable to me. Not least because of this I am pleased that the album reviewed here was technically cleanly recorded and the sparingly interspersed melodies have an appropriate depth. Not an ounce of fat weighs down this compact disc and those who, like me, still and always like pure thrash metal will be well served here. Guess there’s no better elixir for the seductive illusion of eternal youth.