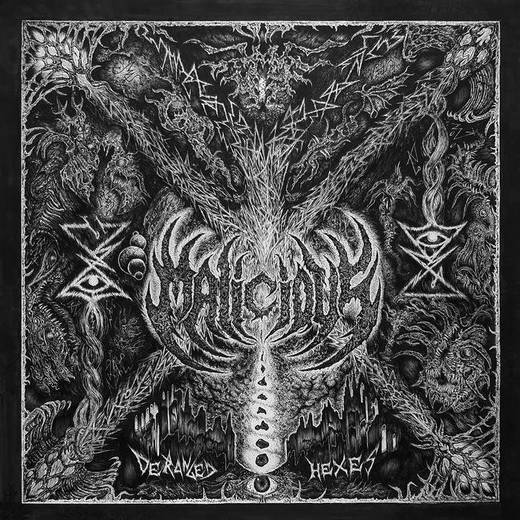 Murderous, maddening, menacing, furious, bulldozing and most of all deranged, all of such be the words that come to mind when you take the time-out to listen to the debut album Deranged Hexes by Finnish death metal band, Malicious. This bring back memories of when death metal and speed had a thing for each other. Take Bathory's "Under the Sign of the Black Mark", add a pinch of Darkthrone's "Soulside Journey" and Sepultura's "Morbid Visions", and this is indeed what you'll get. Insane solos, intimidating and frantic drumming, bestial snarls, and a sharp production combine in creating an absolutely obliterating sound for the condemned to spend their time in purgatorial fields nodding to. You couldn't have asked for a more dangerous piece of material from such a new entity, though that's not to say that all fresh evils are without experience. I understand that the members have played in a number of other bands (none of which I'm familiar with) but still this is just head and shoulders, knees and toes crazy good for a first release. Deranged Hexes is the album for you if you admire the love for some good old fashioned death metal chaos.

Deranged Hexes is short, thus it gets the point across rather quickly and with stark efficacy. Starting out with 'Infinite Perdition', this stampede of lunatics opens the circus of malign with nothing short of a riffing and drum blizzard. Fast, nasty and technical, this song is like placing a surgery knife in the hands of a schizophrenic and tasking him with the duty of performing some meticulous organic extraction. Yeah, I think you get the point now, and to make matters worse, the music here onwards only gets more and more fucked. The vocals don't help either, they're manacial and without apology. Put all this together and by the time 'Perpetual Paranoia' smashes you in the face, you'll be trapped in the nightmare of this never ending occult driven, death laden rabbit hole. You'll be questioning your own sanity for even enjoying this musical turmoil. The mad-men behind Deranged Hexes surely know how to evoke that sense of 80s death metal classicism all the while delivering feelings of trepidation, dread and cyclonic devastation. One playthrough and you'll love every track; plus given the total runtime is about 25 minutes, you'll be speeding to the finish line 10/10 times without even realizing it.

The musicianship is incredible; because they play so fast and frenetically, new sections, instrumental constructs and conversions are always being revealed to you. Rarely ever you'll find a repeating passage or transition, something is always changing. Perpetual twists and turns keep you guessing and offset, never certain of what awaits lurking this Finnish occult asylum. Yet it all falls into place ever so neatly with tracks like 'Hideous Transformations' and 'Nefarious Mutations' dispelling some of the best transitions on Deranged Hexes but never at the sacrifice of the guitar and drum lawlessness. I mean the instrumentation on here is absolutely vulgar; they're composed in such a way that you'd belive if they could be translated to words, all you'd be hearing is the most complex ways of saying fuck you!!!

Long story short, get this record!! Deranged Hexes is a scamperting, aerial-onslaught on anything that moves. Out on Invictus Records October 30th, on vinyl, cd and digitally. Pick your poison.