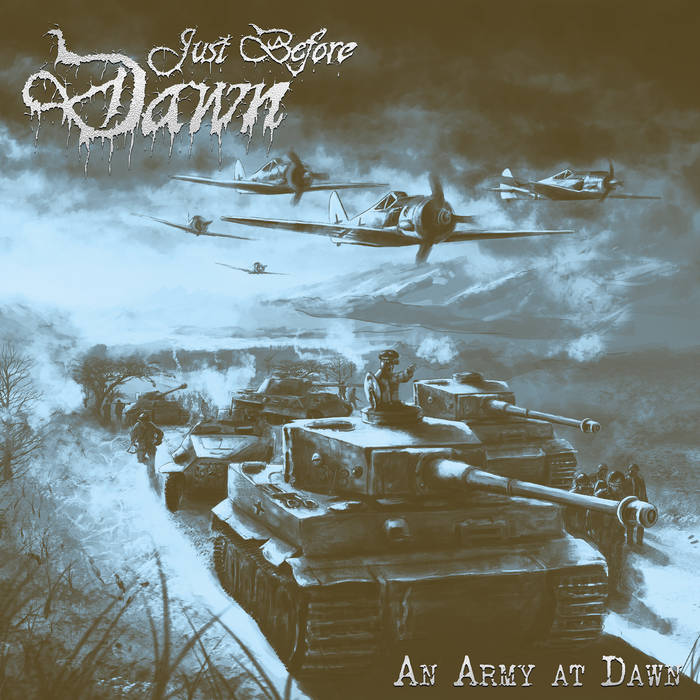 I have to say this now, even if it has nothing to do with Just Before Dawn in particular. It is insane to think that producing or consuming music gives you even an inkling of war. I am not a pacifist, but the war obsession of some musicians sometimes amazes me. Again, this doesn't only apply to Just Before Dawn, but anyone who wants to glorify war should first have marched 40 kilometres over dusty roads one day with a full pack. The next day again and again and again. Unwashed, a few lice under the armpits, little to eat and no women far and wide. You don't need a Russian winter or a wet hole in the ground on the Somme, let alone enemy artillery fire, to find it all a teensy bit uncomfortable. Sorry for this – now to the music on An Army at Dawn.

Just Before Dawn are known to enjoy working with a variety of singers. On Tides of Blood Dave Ingram did the lion's share of the vocals, this time it's again a who's who of rough throats. Naturally, this works sometimes better and sometimes worse. As a conservative bone, I would wish for more consistency in the singer's position, but of course the Swedes' deviant approach is also no reason to break the baton on them. However, from my point of view the vocals of Matias Nastolin in 'The Guns at Last Light' do not work very well. This represents a slight deterioration compared to Tides of Blood. Unfortunately, the song material cannot quite keep up with that of the predecessor. The title track captivates with its melancholic, dark riff, which is replaced by double bass fuelled passages. But the song also has a blemish. At least at the beginning it sounds suspiciously like Bolt Thrower's "...for Victory".

Anyway, there are undoubtedly more powerful, atmospheric, accusatory and fatally heart-breaking songs to discover. 'To the Last Tiger' boasts with mighty riffs, the up-tempo number 'Goliath Revived' pulls the reins tightly and the massive 'With Everything We Hate' rolls in like a tank. But the bombing explosiveness of Tides of Blood is missing for long stretches. This time the songs come from a structured brain instead of an angry gut. This is not inherently worse, but in the case of Just Before Dawn, the changed approach is a bit to the disadvantage of impulsiveness. Obviously, Just Before Dawn still stands far apart from the legions of uninspired death metal combos whose songs oscillate between spectacular harmlessness and awe-inspiring incompetence. The slight downward trend is nevertheless regrettable. Fortunately, it is not reflected in the production. An Army at Dawn – by the way, great artwork – convinces with a mature, meaty mix that is heavy enough for devotees of the genre and smart enough for curious walk-in customers.

The bottom line is that the Swedes clearly do more right than wrong. They have even thought of the evil Adolf, especially at the end of 'The Atlantic Wall'. That could be a snippet from "Downfall", when the Führer gives orders in the bunker that no one can carry out anymore. Anyway, it sounds demonic and reminds us that the dead are counted at the end. An Army at Dawn is not a blitzkrieg, it rather gives the feeling of a battle of attrition of traumatised soldiers. At least that's how it feels to me, who never had to go into battle either. Lucky me.