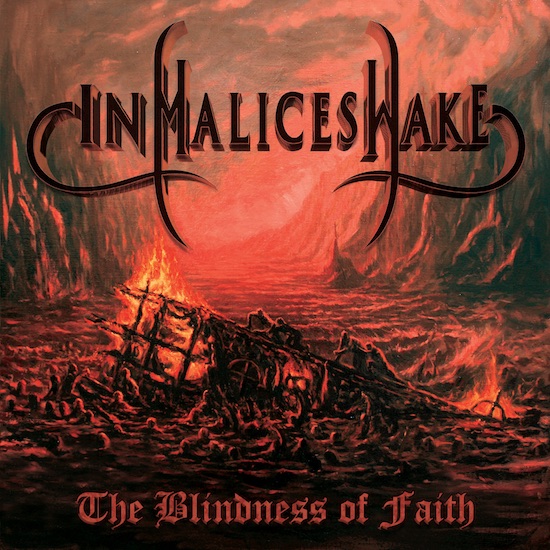 - Good day doctor, I don't feel well. Do you have a quick test for my health?
- Of course. Attention, I will now play you the first 30 seconds of 'Religious Holocaust'.

30 seconds and an inferno of ingenious sounds later...

- I feel nothing, Doctor.
- Then you're a poser. You are condemned to feel bad all your life. No medicine can do anything about that. Have a nice death.

Well, let's leave this likeable doctor's office and turn to The Blindness Of Faith, which burns off fireworks of thrash metal not only in 'Religious Holocaust'. No idea how many power plants are needed to produce the excess of energy that the Australians have put into almost all the songs here. What is certain is that The Blindness Of Faith is an extremely strong album with some incredibly good moments. It lives not only from its superb production, which offers the optimum in pressure, force, directness, devastation and transparency. There is no question in my mind that this music cannot be staged better, because despite all the clarity of the sound, there is in no way a sterile impression. But what am I blathering about the production here? It's about the songs! To be honest, I don't even know where to start. With the murderous groove of 'See The Light', which in no way pushes the piece in the direction of modern thrash? At the tension-building introduction of the title track? No question, the old "Hell Awaits" school shimmers through here. Or with the unbelievably massive power and heaviness that not only characterizes 'Unbound Sinful Light'? I can't make a decision; my manager muscle is failing. Is our friendly doctor's office still open?

The quartet offers a full service rarely experienced in 2021. Despite all the heaviness, all the speed and all the vehemence, the band never loses control of their cutting riffs, which are the Down Under version of the riffs of the once young and godlike Slayer. Yet the extended Farrugia family never obviously borrows from the heroic deeds of veterans, Slayer, Exodus or otherwise. (By the way, I don't understand why Testament is the first band to appear in the similar artist list, because in terms of hardness there are worlds between Skolnick's talking guitar and the massacre offered here). On the other hand, In Malice's Wake still remain in pure thrash, just in a very wild form. The comparatively restrained 'To Die As One', which is a bit out of the usual frame in terms of quality, is only an exception to the norm. Its staccato chorus wants to emphasize every word, but it just signalizes that the song cannot compete with its nine companions. A fundamental, brilliant idea is missing here. I’m almost glad about it. In view of the inflationary ratings in our scene, the highest grade is probably sold out anyway.

Never mind. The unbridled and relentless power of the compositions draws you in and it is miserable that this album hasn't found a label. Music is for you and me, not the f**king industry, I would write right now if I were a punk - but I'm not. Instead, I would like to point out the concept of the album, which of course deals with blind faith and its consequences. At least in the lyrics of the booklet, the musicians take a differentiating position ("Faith and religious practices can be a very personal and very beautiful thing."). I can neither confirm nor deny this, given my own distance from the church. But I do know that the intensive consumption of this album is a "very beautiful thing". Again, and again, guitar lines break through, as they did for the first time on 'Hear The Howls' from the previous album. The protagonists keep building typical yet surprising elements into their songs, making the ride through their music an adventure almost without precedent. The density of the compositions is unparalleled and Shaun Farrugia's voice has gained even more power, roughness and passion. The visual aspect of the album is also convincing - just a pity that the awesome artwork can't present itself in LP format.

I am not related to the Farrugias by blood or marriage. About 60 years ago, my uncle emigrated to Australia (was no great loss for Germany), otherwise I have no relation to this country. Nevertheless, I can only say: everyone, really everyone, whose heart beats to thrash rhythm, must know at least one of the last albums by In Malice's Wake - and best of all this one. 'Into The Outer Darkness', but especially 'Ritual Slaughter' unpack some Hanneman memorial riffs and convince all along the line. The same goes for the rampaging 'Graven Image' (is that still music or already a machine gun?) or the almost epic finale 'Gehenna'. And so on, and so forth - the brutal barrage of these 53 minutes leaves no life in the enemy trenches. Honestly, I'm glad that this record was already released at the end of 2020. Otherwise, it would have been pretty damn tight for my all-time favorites Exodus to present the thrash album of the year 2021 with their announced new work.