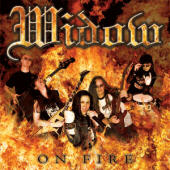 Got to say that metal with female vocals, done completely right, still is the best sound out there. I appreciate the fact that women have better range and… well… kick ass as well. Case in point is a band out of North Carolina, led by one amazing young girl simply named Lili. Her band Widow has captured a sound right out of heavy metal’s past, improved and modernized it and gave it to us all to raise our horns to.

Little is known about this NC based band, but the sound definably says volumes in its absence. Coming out of the blocks with influences like Iron Maiden, Armoured Saint, Judas Priest and a huge batch of American power metal mixed in… Widow’s game plan is a simple one - they hit you with both barrels and drag you along for the ride.

The CD has many exceptional tracks throughout its playing time. "I’ll Bury You Alive" (the album’s closer) and "Re-Animate Her" has that NWOBHM feel, and yet holds the explosion of power metal as well. The other track has this blistering feel of early Maiden with the richness of American metal, and its name is "The Preacher’s Daughter".

The one thing that is wrong with Widow is that they are not going with the amazing vocal abilities of Lili and now are going as a trio. I have heard the outcome on YouTube, and it is not as amazing as with their metallic angel. This album is their crowning glory and I for one is hoping that they see that bringing her back to forge ahead in pursuit of perfect metal. This was a near perfect metal album and you need to hear it to see that.