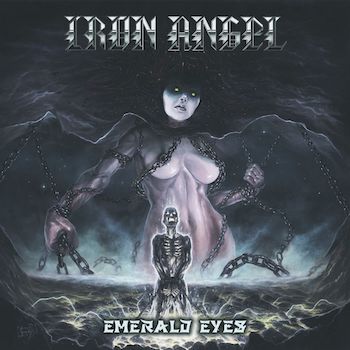 I am old. I experienced the Hellish Crossfire big bang that still thrills me today. I regretted the weakening called Winds Of War and almost fell into despair over the slide into the seemingly endless coma. But the worst was the return with a video for an advance track of 'Hellbound' with Dirk Schröder posing like a vain idiot conducting a drunken crowd in a cheap vacation club.

Iron Angel were dead to me. But then I heard 'Descend' and whoops, that was unexpectedly good. Very good, in fact! I remembered my old love for Hellish Crossfire and hooked this review. Emerald Eyes manages to produce at least four bull's-eyes with only one recipe. A fast verse, carried by absolutely spot-on riffs, leads into an anthemic chorus, in which the back vocals and Dirk Schröder each interact excellently. This makes 'Descend', 'Demons', the title track and 'Sacrificed' to excellent highlights. These tunes are more contagious than this loser called Covid 19 and if I would not be too old for it, I would play air guitar again. Alright, the album lacks the blackened aura of the debut, although 'What We're Living For' (enjoy its fantastic verses) recycles the riff of the debut's title track. Nevertheless, Iron Angel convince with energy, power and liveliness. Schröder adds a lot of value to the songs with his mature, vigorous and occasionally theatrical voice.

Velocity plays an important role on Emerald Eyes, but there are also rather mid-paced pieces. This is, besides the high quality of the songs, another feature which reminds me of their classic. Just remember 'Black Mass' or 'Hunter In Chains', these (ingenious) tracks also did not focus on high speed. Iron Angel present a good mix where almost every song is able to develop its own individuality. Their down-to-earth approach puts them in the vicinity of Mystic Prophecy from time to time ('Fiery Winds Of Death', even the title with its stereotypes sounds like a song name of the long-lasting traditionalists). Of course, I am speaking of the “real” Mystic Prophecy here, not this caricature version of this band that recorded the ultra-shitty “Monuments Uncovered”… Yet I must admit that I prefer the spontaneous, impulsive and fast-beating torpedoes. Tracks like 'Bridges Are Burning' are not bad, but somewhat unspectacular. They follow a very traditional form of song-writing with solid yet not outstanding riffs.

I am also impressed by the immaculate sound of Emerald Eyes. Its well-balanced, powerful and clean (not polished) straight-in-your-face appearance makes it easy for the songs to demonstrate their strength. Given this situation, Emerald Eyes is an opus every speed / thrash maniac with a weakness for the old school must know. Hell yes, where is the next mirror? It's air guitar alarm! The only thing I fear is that they will need once more 35 years to record another fantastic full-length. Then I will be really too old for the album... at best too old!