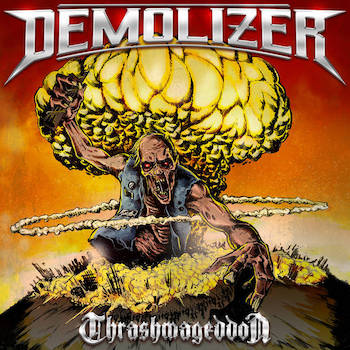 'Copenhagen Burning' is the name of the opener of Demolizer's debut and to be honest I thought its lyrics deal with a historical event, the fires of 1728 or 1795 for example. Or the Danes take as their theme the completely unjustified bombardment by the English in 1807, which also ended in a major fire. But no, the text remains vague and anti-religious. What a pity, a missed opportunity. Unfortunately, this is not the only wasted chance. Missing opportunities are rather symptomatic for Thrashmageddon.

It's always easy to praise an album to the skies - or to rip it apart verbally. Thrashmageddon is neither suitable for one nor the other. The quartet doesn't do anything seriously wrong, but can't inspire with great song ideas either. Thrash metal with minor borrowings from hardcore, somewhere between Fusion Bomb from Luxembourg and Toxic Shock from Belgium, can inject a very invigorating dose of music. In fact, Demolizer is not lacking in energy and joy of playing either. Only, too little sticks. 'Bloodshot Eyes', for instance, has a good start with scratchy guitars, a fine riff, restrained drum rolls and cool double bass drums. But after about a minute there is a break and the atmosphere of the song is partly lost. Not a bad title, especially as the motif from the beginning returns - I just think the guys could have got more out of the basic structure.

Apart from such fundamentally strong songs, I am listening to a somewhat crude mixture of, for example, a punky, relatively pointless one-minute grenade, a thrash semi-ballad ('Until the Day I Die') and a piece called 'Lost in Torment' whose eerie beginning was cut out of some Testament piece and slightly altered. Debutants of course have the right not to be completely stuck stylistically. In this respect, a stumbling through the various niches of the thrash metal hall of fame is forgivable. Nevertheless, a somewhat diffuse picture emerges in the end. However, the production is not to blame for this. This first business card from Demolizer sounds loud, direct, clear and sharp. The aggressive vocals and the noise level of the instruments balance each other out. Working together, they roll out the red carpet for a fine headbanging air guitar session, but unfortunately the cracking compositions are lacking for this. To illustrate it again with 'Copenhagen Burning': its intro sets the stage excellently, but instead of an all-destroying blow, a very solid track follows, hectic solo included - nothing less, but also nothing more.

I like listening to thrash too much to give ambitious, carefree and energetic up-and-coming artists a bad review. My advice (which of course nobody really needs) would be to put a few catchy choruses on the next album. The true classics had choruses like "Time to run or fight off the strike of the beast" or middle parts like "watch as flowers decay - on a cryptic life that died" which immediately captured the ear. If Demolizer manages to add one or two earworm parts to their next songs, nothing will stand in the way of a successful future. At the moment they haven't taken that chance yet.