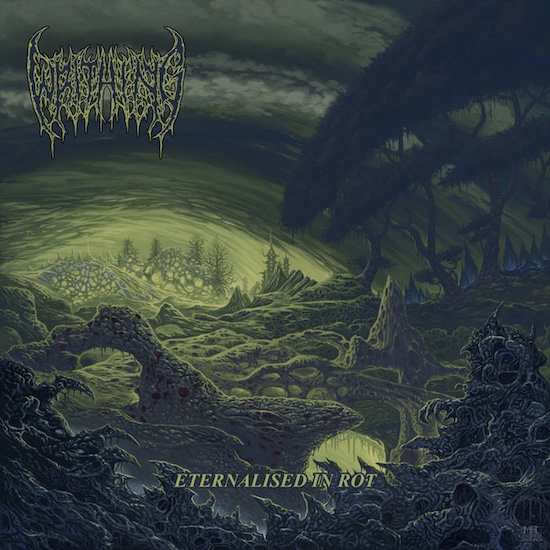 Mixed and mastered by Dan Lowndes, with accompanying artwork by Mark Cooper, death metal lovers prepare for some old school goodness. This 2-track sampler handed down for the masses to consume is the signaling of a full length being prepared by Writhing. A new sect of twisted beings hailing from the hot hell that is Australia, take up their instruments and put them to great use and abuse on their debut outing, Externalised in Rot. Composed of a double dagger attack, the exhumation is put into effect with an ear-opener, 'Void of Derision'; a muscular showcase of eviscerating death growls, riffs and drumming, all of which harken back to that 94-95 period of death metal sauciness. But the real winner here is title track 'Eternalised in Rot', a foreboding and corrupt concoction of Incantation and Writhing's own decaying fluids. Its but one reason we listen and admire the genre; the excitement, the feeling of being treated by menacing strings, vox and hammers, and has that death/doom taint that any loyal listener would identify. Despite its premature end, it really leaves you wanting more and wondering what their full-length album will (under the same name) spawn. Keep a keen ear out, Writhing's work in the undersoil is far from complete.