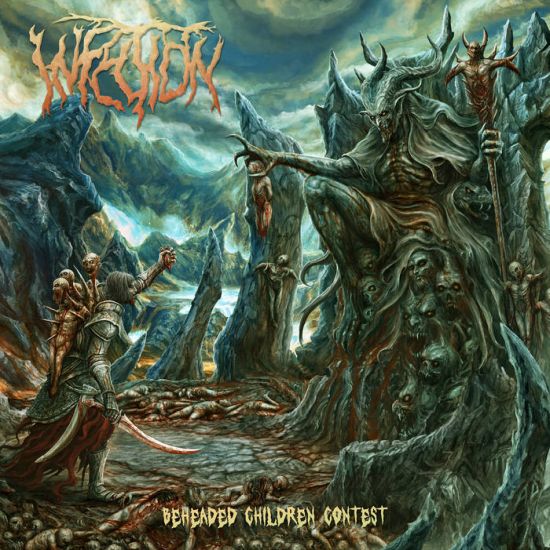 Serial killers, depravity, and human evilness are some of the themes that Infection displays in their latest EP by the name of Beheaded Children Contest, an interesting name in terms of shocking value by the way. This band hails from Peru and currently has two stable members since its formation in 2006, one in vocals (Giuliano Canessa) and the other one on guitars (Antonio Palacios), the other two members support the band live in bass and drums duties. Being a death metal fan, I found this EP short but at the same time brutal and memorable with fast passages that integrate both old school vibes with modern production.

On one hand, what caught my attention the most was the sick front cover, come on, take a look at that twisted art. The cover is full of gruesome details related to children mutilated corpses in a kind of offering to the dark lord, very ad hoc to the band's music and lyrical concept. So far, the best art the band has used in their albums, it looks more professional and purposeful than in the previous ones. Being said that, the lyrics are something to highlight as well. Those are written in Spanish but the title tracks are written in English which was a little bit confusing, in my opinion. The title tracks, as well as the lyrics, are very explicit in violence and brutality; depicting scenes of gore, mutilation, murder, and child abuse. However, I would like the lyrics to be written in English to deliver the message in a straighter forward way and also to have a more international projection for the band. I don't know why the lyrics were not delivered in English but I think it might be a lack of experience with the language, song-writing problems, and even a sense of keeping it local and loyal to their Peruvian roots. Anyways, that’s not a big deal and you can still enjoy the EP even if you do not speak Spanish.

On the other hand, talking about music, it is a meat and potatoes death metal. I appreciate the fact that the band worships the old school vibes of bands like Cannibal Corpse, Death, and Entombed. They also imprint their sound and aggression, we are not talking about a copycat band here, these guys play their instruments with passion and vehemence. They even include a Napalm Death cover, “The Kill”, contradictory in a way because it is in English. I wonder why the whole album was not in English as well, it would have been even more interesting. The overall impression I got after several listens was positive; the instruments sound clear enough and the production is not clinical as in progressive or technical bands but it does the job well. The band mixes rhythmic sections, some hooks, killer riffs, and fast passages to create their version of death metal. They are not re-inventing the wheel in the sub-genre, however, you can tell that they are enthusiastic metalheads looking forward to contributing to their local scene with some brutal tunes. The vocals are guttural, violent, and inhuman, nonetheless, you can understand what is being sung in Spanish. No pig squeals which is good also.

All in all, Beheaded Children Contest was a very economic yet fun listen. I enjoyed the hooks and rhythmic changes showed by the guitar player through all the EP. All the instrumentation was delivered with brutality and animosity, there is no melodic passages or stupid intros from b movies only aggression in the form of death metal. Every song showcased its personality yet they seemed to follow a common thread of ideas and patterns. Lyrics wise it demonstrated how fucked up are humans in all senses, serial killers, child abusers, coprophilia, vengeance, etc. The whole EP was enjoyable and fun to listen but the high point, in my opinion, was the track named 'First Your Kid, Then Your Wife, Then You'. I liked how the band structured this track with memorable guitar riffs and fast drumming. I wish Infection continues in this brutal fashion and hopefully, they take the risk and write some songs with lyrics in English shortly to see how it comes. Very recommended for fans of underground death metal!