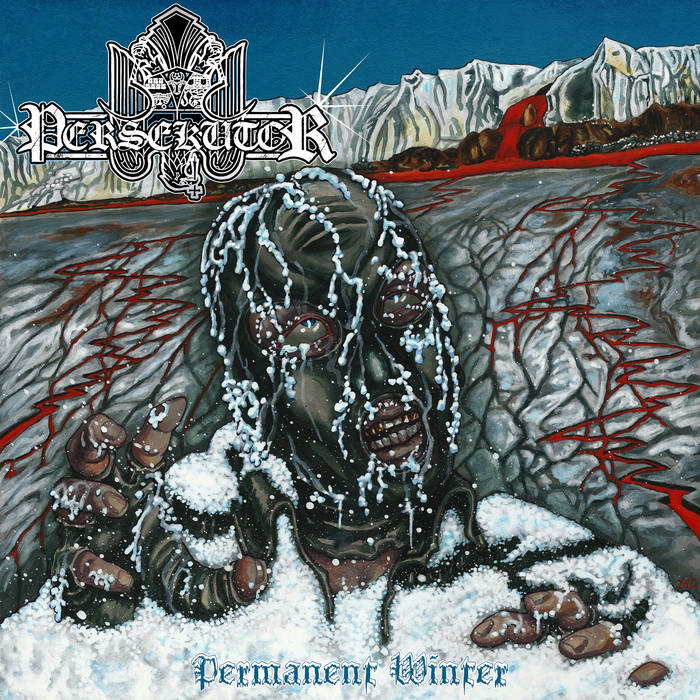 Romanian "Ice Metal" band Persekutor has released their debut full length album Permanent Winter that does a great job of merging black metal with punk and heavy metal. This is one of the more memorable releases within the sub genre that utilizes the punk metal essence in their musical temple to satisfactory effect while adding other facets of other genres.

I'm not familiar with many Romanian metal bands, and the few I know are secrets I keep close so there will be no telling here. However; at least I've introduced you to Persekutor, that I know you will treasure once you've had a listen of Permanent Winter. This will keep you "up all night"; these guys can play a tune with some good bang and they also have some cool lyrics going in the tunes. Yea according to them "it's just rock n' roll" so don't get your panties in a twist.

Permanent Winter came at the right time, just when I was looking for some punk fused heavy metal that didn't sound dated, I found Persekutor. Was sceptical at first given the wave of bands coming out with new wave metal and what not but it was their music video that was shot for the single 'Black Death Punk Skins' that was confirmation of something I might be interested in. And after countless spins I honestly say that Permanent Winter is one of the best heavy/black/punk metal albums of 2020.

All the songs are great, and they only get better with each new playthrough of the album. 'Babylon of the Snows' is perhaps the weakest song on the album but even that has its moments; but following that the lads really start to show out big time with 'Can You Feel the Frost of Dawn' and 'Winter's Meat'. It's not just your average picking and beat pacing, these guys know how to write some good tunes. They've got the ear for this kind of thing especially when you take a listen at how well they convert the basic structure of 'Can You Feel the Frost Of Dawn' into something really telling of their efforts. It's here the band stands out, each song seems to speak its own tongue, you'll never feel like it's static on repeat. Also they really know how to use the guitars and melody to their advantage especially on my favorites off Permanent Winter being 'Chained To the Tundra' (that drags the heavy metal down to some rocking mid-tempo), 'Black Death Punk Skins' (that features the catchiest rhythm and verses) and 'Arctic Cross' (that gives off some real old school doom metal vibes).

Persekutor is just an amazing band I tell you, their solos are sweet all the while fucking mean, their black metal undertone merged with the spiky punk metal fist pumps on the faster tracks and the traditional heavy metal song structures they got pinned down under their stalagmite frozen lyrics just makes for an even more enjoyable listen. Just a great record with an impending and intimidating sense of danger lingering on every note. This is what you want from a band claiming to play heavy/black/punk metal. Great riffs, solos, fantastic vocals and overall memorable tunes you and the guys can get wasted to. This is one 'Ice War' you won't forget anytime soon, it'll freeze your nuts dead cold.