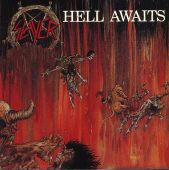 Show No Mercy came as a real bombshell and changed my musical preferences once and for all. Reign In Blood marked the album which influenced all following generations of thrash metal musicians. It seems only logical that these two milestones must be praised for representing the undeniable highlights in the discography of Slayer or even more in the history of thrash metal. But appearances are deceptive. Hell Awaits is better. Whether you believe it or not, Hell Awaits deserves the honour of being the best thrash metal album ever. Of course, one has to be very careful when using superlatives, but from my point of view, this one is exceptionally justified. On the one hand, it presents the malicious, aggressive, intense, insidious and devastating quintessence of its genre. While offering solely genuine thrash, it marks the only album of the first three Slayer full-lengths without punk influences. On the other hand, it shows an ambitious, highly motivated band that acts technically perfect, not at least because of Dave Lombardo's outstanding drumming. Almost 30 years after its release this masterpiece of malignancy has not lost any of its fascination.

Already the eerie beginning of the opening title track left its mark on the thrash metal scene. The slowly growing riffs were more or less copied by great bands like Onslaught ("Let There Be Death"), Dark Angel ("Darkness Descends") or Devastator ("Maximum Destruction"). Even after more than 25 years, the Australians of Hellbringer copied these riffs on their fantastic first full-length. Admittedly, not so much the riffs itself but the aura and the song formula were picked up by these groups. The same applies to the outro of the final track, 'Hardening Of The Arteries', which is characterized by its howling guitars. You find these guitars again, for instance, on the recent full-length of Aura Noir. All these excellent bands (without this list being exhaustive) pay tribute to Slayer and especially to Hell Awaits. These points alone already make clear that this masterpiece left a huge impact on the scene.

Due to the album's running time of 37 minutes, each and every of the only seven songs had to be optimally thought out and that is the case here. Without being excessively progressive, the tunes offer an appropriate number of breaks. Nevertheless, they come to the point, because the focus is always kept on the songs themselves. Furthermore, the band does not neglect the necessary amount of sick melodies. I would therefore not change even the smallest details. To name but a few: Tom Araya's voice never sounded more malignant, the guitar solos combine brutality and musicality in a perfect manner, the precise riffs work with clockwork accuracy and each and every tempo change increases the tension. But above all stands, as mentioned previously, the drumming of Lombardo. For example, listen to the inferno that he unleashes in 'Necrophiliac'. His drum fills are simply admirable.

But what would all this be without an equivalent production? The sharp sound of the album is dominated by harshness and transparency. All instruments - including the bass guitar, which is, as you know, hardly audible on some records - are well balanced. On top of this reigns the imperious and powerful voice of Araya. To my mind, the album has the same effectiveness after all these years as on the very first day.

I have to apologize that I cannot tell you the song titles of the highlights. Some might argue with good reasons that the monumental title track is the best song. Some might prefer another track. But from my point of view, the whole album constitutes the highlight. And it goes without saying that there is no downer. Some eternal grumbler might be of the opinion that 'Crypts Of Eternity' cannot compete with the remaining tracks. I don't think so. These wretched creatures always have to have something to gripe about. In my humble opinion, the song is perfectly constructed - do not get confused by its cautious start. (And do not care about the inexplicable fact that "superstar" Michael Jackson was given a place on the inner sleeve. Thank God, he was definitely not involved in the production process of the album.)

There seems to be only one reason why the musicians did not bury the band after this release, although Hell Awaits was unsurpassable. You all know exactly what I am implying. Reign In Blood was in the making. But please note: the band chose a completely different songwriting approach on this record. A wise decision. With a view to Hell Awaits, "Hell Awaits Part II" would doubtlessly not have had a chance to achieve a comparable level. But this applies to every goddamn album of the genre worldwide. Thus, as mentioned above, you do not have to look for a better thrash metal release. Or to express it in the words of Tom Araya: "What you seek for can't be found / In sea or sky or underground".