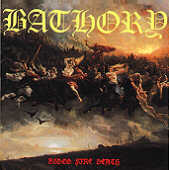 It is a drama that Quorthon died much too soon, even though some of his works are really a pain in the ass. He was the chameleon of metal; his drastic stylistic changes were hard to understand but everybody with a predilection for great metal will find some jewels in Bathory's discography. Blood Fire Death belongs to the strongest efforts of Quorthon, at least for those who do not think that pure Viking metal is the ultimate sub-genre.

It is a drama that the album did not continue the bloodline of the perfect Under the Sign of the Black Mark. The songs are not too far away from those of the aforementioned monument. "The Golden Walls of Heaven" stands shoulder to shoulder with "Massacre", inter alia due to its straight verses. The stomping "For All Those Who Died" is a close relative of "Call From the Grave". Nevertheless, the more metallic sound and the longer duration of the single tracks give the album another flavor. Not to mention the elaborate and atmospheric intro which constitutes the acoustic complement of the classic artwork. Celestial choirs and whinnying horses make clear where Rob Darken once found his inspiration... Admittedly, the serious grandeur of the gatefold vinyl does not mean that the lone fighter is unable to make a joke. The beginning of "Pace 'till Death" picks up the squeaking riff of Venom's "Teacher's Pet". With a twinkle in his eyes, Quorthon sends greetings to his idols. But from an overall perspective, this is a much more serious work than the somewhat bizarre Under the Sign....

It is a drama that Blood Fire Death marks the point where the adventurous Swede began to lose his enthusiasm for sheer aggression. Let's face the ironic twist of fate: the two epic numbers of this album are absolutely brilliant, but in hindsight, they implemented the seed of lethargy in Quorthon's creative outputs. I know that many metal maniacs have built an altar for Hammerheart and Twilight of the Gods, but I don't share this point of view, because the overly dignified approach has not much in common with the rebellious touch that made heavy metal to something special. However, I don't want to digress. Blood Fire Death cannot be blamed for lameness and with the exception of wide parts of the pretty noisy "Dies Irae", all songs have an exciting aura. (At least "Dies Irae" deserves the honor that its excerpt "Even the heavens shall burn when we are gathered" might have inspired Marduk in their search for a fitting album title.) "For All Those Who Died", for example, scores with its overarching vehemence. Sheer power crushes the audience, despite the comparatively stupid mid-tempo rumbling.

It is a drama that the best track of the full-length offers. Indeed, a more dramatic song is hardly imaginable. Switching between soft choirs, which are accompanied by an emotional guitar, and thunderous, painfully intensive metal pathos, the song develops an unbelievable power and one sees raging flames before the inner eye. Apart from this emotional rollercoaster, the guitar work is extremely strong and Quorthon sings and screams more passionate than ever before. It is time for great emotions at the latest when lines like "With hair as white as snow / Hammer of steel / To set you free of your chains / And to lead you all / Where horses run free / And the souls of the ancient ones reign" mark the title track's point of culmination. "A Fine Day to Die" does not stand in the shadow of the titanic closer. After a silent intro, the song explodes, and harsh screams accompany brutal guitars. Space-filling leads roll out the carpet for Quorthon's hoarse, cruel and charismatic vocals. Finally, a melodic element is added as well.

It is a drama (but no unique event) that some medias did not understand the greatness of Blood Fire Death. The German Rock Hard spoke of ridiculous solos and hyper-perverse vocals while giving generously seven out of ten points. Okay, they tried to entertain the readers, but come on, stop writing - start your career as clown. I do not find any kind of ridiculous (but a lot of unleashed) solos and a kick in the ass of the mainstream is almost never "hyper-perverse", but a necessary act of resistance. The coarse and devastating production which lacks any form of nuances sets the right frame for such an act. Technical details are for wimps and maybe this was the thing that the joker of the Rock Hard was missing. But despite all these "dramas": the only truly tragic drama is the one I have already mentioned in the first sentence of this review. Quorthon, rest in peace.

Before trailing off from their black metal past, Quorthon/Bathory left this phenomenal album bridging the gap between their last album, “Under The Sign of the Black Mark”, and their next album, “Hammerheart”. “Blood Fire Death” moves its way through eight tracks of glorious Viking/Black metal and is still leaving its effects today.

Finally, Quorthon has decided that he isn’t going to do another album where the material is as fast as possible! It is on this album that Quorthon takes his musical visions and does a little bit of wandering into the Viking side of things. The first opening track, ‘A Fine Day To Die’, is one of the greatest opening songs for an album that I’ve ever witnessed. It tells you what the album is about, and sets the atmosphere for what follows. Almost every song on here has a very epic feel to it, accompanied by Quorthon’s black metal rasp. This definitely may not be what some people want to hear, but it fits the music terribly well. Following behind the black metal rasps are some backing vocals and choir work. This is definitely something that brings the songs credibility up a few notches. Somewhere in the middle of the album, Quorthon decides he isn’t finished with black metal, and leads a fast-paced assault on your eardrums. The tracks are well done, but it feels a little out of place with the amazing opening and closing of the album. Finally, the album closes with one of the greatest tracks that Bathory has ever done. The title track, ‘Blood Fire Death’, has an excellent epic atmosphere and overshadows what is to come on the bands next work of genius, “Hammerheart”.

“Blood Fire Death” is a stand out album for fans of more than just Bathory, but the genre of thrash and black metal. Mandatory listen for anybody to ever claim to like black metal, or anyone interested in the history of metal or Bathory.

Bottom Line: A highlight of Bathory’s career and a highlight for the genre. Groundbreaking and influential to many of today’s metal bands, consider this something you need to check out.