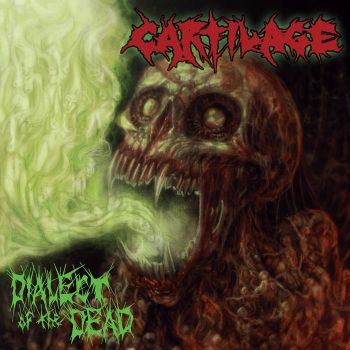 Buy on: Bandcamp
Type: Full-Length
Release Date: February 3rd, 2017
Label: Transylvanian Tapes
Genre: Death
1 Intro
2 Half The Man I Used To Be
3 Gurgitor
4 Entangled In Innards
5 Cannot Stop The Clot
6 Chopped And Churned
7 S Is For Surgery
8 El Necrocabra
9 Back Seat Victim
10 Dialect Of The Dead

Straight from the cesspit of bubbling ooze that was created by the sound of the first Carcass albums comes US death/grind combo Cartilage. With Dialect of the Dead they dropped a full length of gory metal emanating all the vile vapors you'd want from a band like this.

As you'd already suspected perhaps, Cartilage isn't the most original band on the block but they deliver the goods with copious amounts of conviction. Musically we have to look in the direction of Exhumed's "Slaughtercult" and bands like early Frightmare, Deathtopia and General Surgery have also crossed my mind. Hardly surprising of course: those mentioned have all come forth from the root that is called Carcass, as is Cartilage. However, it was the songwriting that has gripped me, sucking me into the bog of their craft and leaving me to sink further and further down. Helped by a clear and loud production, Cartilage tear through a collection of aggressive death metal fused with a generous helping of sick grindcore, with hooks aplenty that ensure that this nasty little platter burrows itself deep into your brain. The music is excellently executed, with sick riffing and a pounding approach to percussion. In Mark Wallace the band has a beast of a vocalist in their ranks, going from bellowing grunts to ear-shredding shrieks on the turn of a dime. Cartilage go for the direct approach and do not lose themselves in unnecessary technicality, this to great effect, they go right for the jugular. My favorite song is the title track with its dissonant riffing and pulverizing middle part, you try to sit still listening to that.

This is a great album that every fan of the so called "gore metal" genre should at least listen to once. Granted, it's not the most original one, but it's got the power and the songs to convince most goremongers out there. What also should be mentioned is that the artwork and layout of the CD look absolutely gorgeous, making Dialect of the Dead a package you should not miss out on.