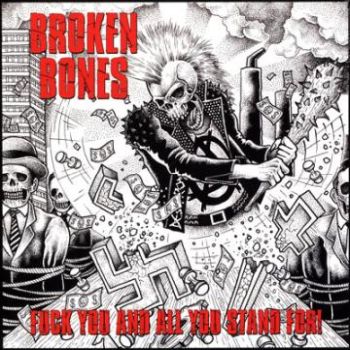 I always had a weird relationship with Broken Bones. On one hand they had awesome pounding punk-fueled thrash songs but on the other they also had those that were just naff heavy metal songs, almost bordering on glam metal sometimes. Well, not anymore. The good news is that those days are over with this excellent release.

The band plow ahead with metallic hardcore songs that have the energy of the old Discharge classics. It's furious, pounding and aggressive as hell with a starring role for guitarist Bones's riffing and lead work. The band sounds utterly pissed off as they work their way through the 11 powerful tracks on offer. I find it beautiful to hear that vocalist Quiv sounds better than he ever did before, furiously roaring over the music with conviction and anger. This impressive slab of concrete has also some lighter elements interwoven. Underneath the violent thrashing punkcore there are some subtler touches in the style of Killing Joke to be heard and it must be said that this works well within their massive sound. These parts give the whole some clear points of recognition. The overall production makes the music come roaring out of the speakers. If I have one point of critique it's that the drums have a digital edge to them, with the kicks way up on the foreground, which can be distracting at times. But even with this point into consideration, Broken Bones still has made an excellent rager of a record that wipes the floor with bands way younger as them. This is the purest essence of hardcore punk, period.

From what I heard, the band consists nowadays of practically the same people as Discharge, which makes me really curious about the follow-up to come. With Fuck You ... being the banger that it is and Discharge's excellent "End of Days" in mind, my expectations are high to say the least.