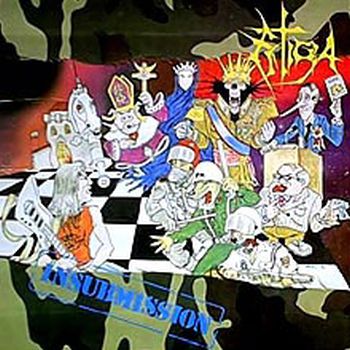 Another one of those thrash metal albums that came out at the wrong time. At this point in the early 90's thrash was way over its peak and most of the established acts were changing their sound to try to emulate Metallica's success or simply disbanding all together. There was however still a steady stream of releases coming, but most of those would prove to have a limited impact, if any. Spain's Estigia falls firmly in with this last category.

I have a sneaking suspicion that their music is influenced by US thrashers like Slayer, Sacred Reich and Testament, but there's a certain German thrash feeling in there as well. In the guitar work I hear a very subtle Iron Maiden influence and there's also some crossover thrash seeping through, giving the total picture a punk edge that suits the band very well. You could perhaps best compare their sound to Sepultura's "Beneath the Remains" effort minus the Scott Burns production job and Max's songwriting abilities. Still, these men know their way around their instruments, and they showcase this in the breaks and numerous leads that pop up through the whole of the album. The music is everything that you'd expect from an old school thrash release from the late 80's/early 90's. This makes it just too bad that vocalist Ander has a very unimaginative style of singing, sounding pretty much like most other B-league thrash vocalist around at the time. His voice complements the music but that's also all it does. The production has its flaws as well: it sounds very dry and manages to suck a lot of the energy out of Estigia's music which is a bleeding shame. If there is anything that this record has in droves it's enthusiasm and that just fails to come out at its fullest because of the overall sound. And while I'm bitching about what bothers me on this LP: was it really necessary to make an almost six minute instrumental the second track of the album?

I find this a pretty enjoyable record even if it has its flaws, this in big part because of the enthusiasm the band showcases in their music. Just listen to a track like 'Fuerzas De Seguridad', it has all the elements that play in this band's advantage. At the same time, I fully understand why this didn't make any impact at all. Probably the label they were with, but this was also just too cookie-cutter to make any splash whatsoever in 1990. Compare this album to other late thrash releases from the time like the debut releases by Demolition Hammer and Exhorder and you'll understand.

This is your typical release for those who just cannot get enough of obscure 80's thrash. This is best enjoyed with your nostalgia goggles firmly on your face and the volume on 10.