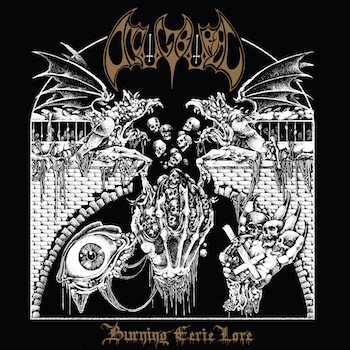 The debut of Occult Burial from Canada had a playtime of less than 32 minutes. Maybe this is the reason why Burning Eerie Lore begins with a comparatively long (and unfortunately completely boring) intro which repeats the same guitar tones again and again. Things can only get better and indeed, the following title track delivers a ladle full of malicious energy. The vile guitar sound and the pumping, very present bass liaise with fast drumming, while the sometimes pretty shrill lead vocalist combines nagging and screaming in an unholy manner. It's nice to see that the band has shed the teething troubles of the debut. Nearly nothing reminds of the almost prehistoric discs of Venom. Not that these were bad - but now the plus in independence and sharpness catapults Occult Burial to a higher level. The combo seems to be reborn.

Anyway, this first fast-paced and wicked attack represents the album appropriately, although a few tracks feature other characteristics as well. For example, the casually titled 'Skeletal Laughter' holds some rocking elements that sound quite strange in the context of this album. The longest track, the mid-paced 'Highway Through Borderland', puts the focus on the rasping (and, by the way, very casual) old school riffing and on a more and more apocalyptic mood. Anyway, usually the formation jumps headfirst in the dirty pond where Nifelheim are already waiting. No doubt, this output makes fun due to its evil aura - and the fact that the end of the French titled fifth song evokes associations with Mercyful Fate (listen to the King-like vocals, in particular the diabolic laughter) is anything but bad. But the best comes at the end: the last two tracks surpass the previous highlights once again in intensity, density and madness. The trio is completely electrified during these songs. I'm surprised I didn't get an electric shock from just listening to them.

The production is well done for this filthy kind of metal. It is reduced to the essentials, it sounds slightly old (but without any reference to the early eighties) and finds the nearly perfect balance between clarity and dirt. The raw musical approach (including the echoing hate speeches of the lead singer) and its technical implementation go hand in hand and that’s exactly how it should be. Due to the fact that black thrash metal generally spits on innovation, we can fully concentrate on the quality of execution. Believe me, Occult Burial do not fail. Quite the opposite: Their diabolic energy is contagious and compared with the relatively mediocre debut, Burning Eerie Lore, an album that grows with every new round, is nothing less than a quantum leap.