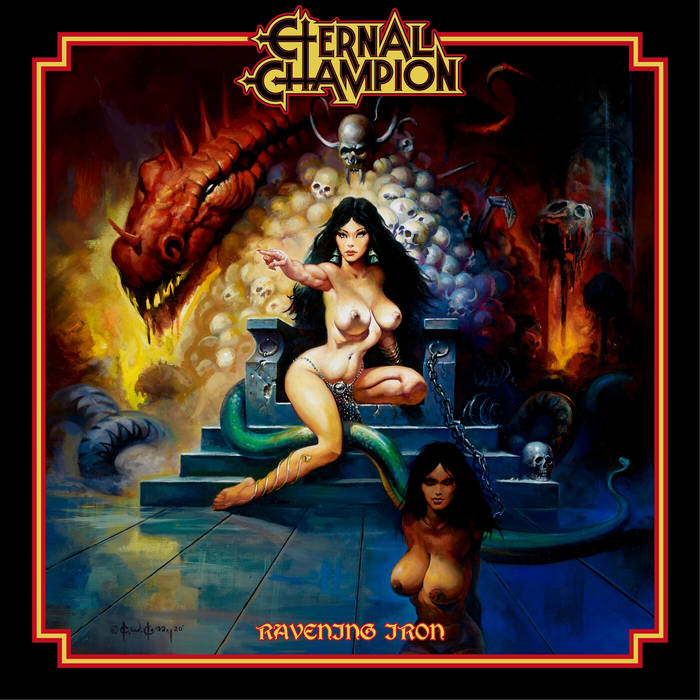 Buy on: Bandcamp
Type: Full-Length
Release Date: November 20th, 2020
Label: No Remorse Records
Genre: Epic, Heavy
1 A Face In The Glare
2 Ravening Iron
3 Skullseeker
4 War At The Edge Of The End
5 Coward's Keep
6 Worms Of The Earth
7 The Godblade
8 Banners Of Arhai

The champion returns with their second effort to solidify their art as a household name in epic heavy metal. All eyes were on this album as their previous installment was hailed as a classic in a time when the term is almost obsolete. So, did they manage to meet these great expectations and surpass the Armor of Ire?

The album is an overall (albeit slight) improvement in almost every aspect of their debut; the sound is better, the band sounds more confident, the riffing is more complex and dare I say the vocals are not as one dimensional this time around. Jason Tarpey should really let himself loose for the next album as there are times that he demonstrates a vocal diversity that the band could further benefit from. The opening of the album was not what I expected it to be, having heard their first single which was an “updated version” of the already excellent title track from the debut. I expected a stronger opener to this one as well, but 'The Face in the Glare' isn’t half as impressive. 'Skullseeker' is a much more solid effort and the first side ends with a breathtaking rework of their demo song 'War at the Edge of the End'. It is moments like these that make Eternal Champion stand out from other bands and since Jason Tarpey’s lyrics and world-building are so well crafted that instantly transport you amidst the fray and still is one of the band’s strongest points. I mean, look at this and tell me this isn’t the most badass verse ever written:

The second half of the album is a perfect 4 out of 4 (yes even the 'Godblade' is a perfect fit) with the phenomenal 'Coward’s Keep' respectfully nodding to 'Each Dawn I Die' and 'Worms of the Earth' with its complex, powerful riffing bringing the best of Manilla Road’s influences to the forefront, always done with the passion and love you’d expect from these guys. The album ends with what might be Eternal Champion’s best song, 'The Banners of Arrai' with the slow buildup to the very emotional ending that ties the album to 'Shade Gate', coming full circle.

Arthur Rizk’s sound output is much more refined, the reverb this time around isn’t as dominant and the overall quality is improved but still maintaining the old school vibe that makes every song shine. If you went through the trouble of reading my review on their debut, you'll see a familiar problem emerging again. The duration. I believe they would surely benefit from an additional, longer track as it feels they play it too safe at times and a longer track would bring the duration to a much more “presentable" length of 45 mins. 4 years for 7 tracks that barely pass the 5-min mark feel somewhat underwhelming, but quality over quantity I guess. It’s hard to say if Ravening Iron is better than the debut but it is without doubt a surprisingly well crafted follow-up. Personally I like this one better, but I think a more thoughtful approach would be to treat both albums as a part of a bigger picture that hopefully will continue to amaze us down the road.

Eternal Champion is here to stay and I’m sure this album will find its way in many lists and will be a great contender for the album of the year (and what a year this has been!). My humble opinion is that the spot is taken by their label-mates Sacred Outcry, but we’ll cross that bridge when we get there.