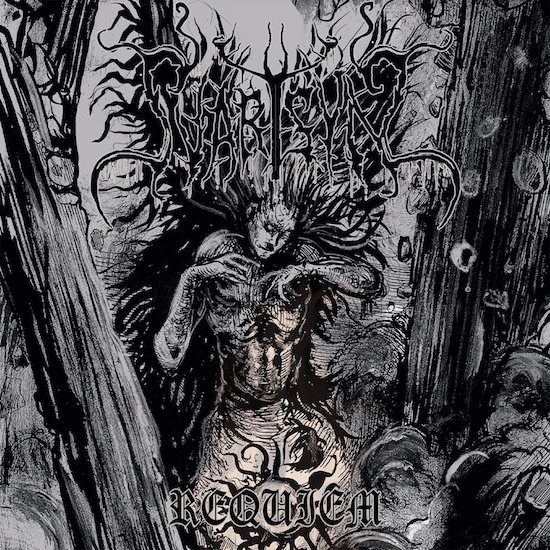 Ornias, the guy who has kept Svartsyn alive for over a remarkable 25 years now, has undoubtedly found his style a long time ago. For decades he has been producing a bubbling brew whose vapours cloud the mind. An extremely dense, murky soup pours before the eyes (and ears) of the audience, and most of the time it tastes good despite its obvious toxicity. Requiem, whose title is hopefully not meant to signal an imminent end of the project, fits stylistically 100% into the productions of the last few years. So far, so good. But it gets even better. Whereas on previous albums the team-less lone fighter put his creative energy into outstanding individual tracks like 'Demoness With Seven Names' and other tracks paled in comparison, Requiem seems more like a high-quality unit. It doesn't matter where you set down the (virtual) needle, coherent, pitch-black guitar runs resound towards you at every second of the work.

The entire dark requiem lives from its ominous, apocalyptic mood, which is the defining feature of the 46-minute material. Melodies in the narrower sense appear rather sporadically, such as at the beginning of 'Inner Demonic Rise'. In general, however, Ornias gives the pieces their individuality with fragmentary harmonies. Atmosphere beats melody, if you want to put it that way. Of course, the artist also abstains from any vocal line. He delivers exactly the vile tones one knows from him, not without the monotony of a proud hatred.

All this results in the compositions achieving a stirring depth. The opulent playing times of the individual tracks, between six and nine minutes, are also an important factor in this context, because thanks to them, the artist provides himself with the opportunity to slowly but surely lead the audience into the depths of each piece. Of course, this only works if the individual songs have enough substance to fill their generously designed format. And indeed - Ornias is able to transfer his ambitious ideas into gripping songs six times. He doesn't run out of ideas and the songs might as well be arranged the other way round, because the quality is consistently high. No question, Requiem is a monolith. Ornias succeeds by dispensing with conventional song structures, refraining from repetitive parts and various tempo changes, which always give the songs a new direction without tearing them apart internally.

A record that focuses on the basic mood, among other things, cannot enthuse without an appropriate production. Requiem takes this into account. Sulfurous, tough and, as indicated above, maximally condensed, the work pours out of the speakers and gives all instruments as well as the voice exactly the space they need to achieve the desired effect. This also applies to the drums, which are the only instrument beaten in by a guest musician with the beautiful pseudonym "Hammerman". The gentleman understands all tempos (very fast in some parts of 'Spiritual Subjection', for example) and without question contributes to the successful overall picture. The result is a full-length that fulfils all expectations or even exceeds them after the weak Nightmarish Sleep EP. I had left out In Death after that - I think this gap should be closed when the opportunity arises.