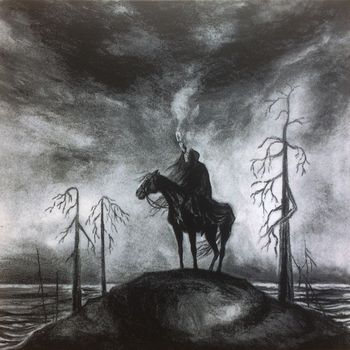 So, when was the last time you were excited about a band so much that you wanted to tell random people about them, only to find yourself wishing to smash their skulls with a Thor's hammer when you realize that they don't understand this "metal" thing that you're talking about? Not lately? Well, then, come here and read this.

A relatively young Finnish band, Havukruunu (something like "coniferous crown") were formed around 2013. One blazing album, several outstanding demos, a lot of Pagan raging noise, and now, in 2017, here we have the second official one, Kelle Surut Soi (Edit: it seems to be something like a wordplay on "for whom the woes tolls''). It's their best so far. And probably my, or anyone's, best this year. Or two years. To get this out of the way first: Havukruunu sounds approximately like something that would happen if Quorthon (around "Blood Fire Death") and Moonsorrow (around "Verisakeet") joined forces and along the way decided to put endless blast beats and two bass drums wherever possible. So, there are insane but perfectly understandable screams (that is, if you're Finnish, I suppose), Viking war cries, ancestor chants, choirs, spirits, and even some clean singing, presumably when the guy gets really mad. That's just the vocals. And then, the drums. Stellar, thunderous and varied, restless and bloody minded. You haven't heard a drummer who loves hitting his kit so much since... Well, since the previous Havukruunu album. If you pay attention, you can even notice him accentuating guitar riffs by hitting different parts of the ride cymbal. During a blastbeat. Because, Havukruunu.

Riffs? Yeah, there are those too. The first reason that got you into this aforementioned "metal" thing, remember? Havukruunu has those. Distant, poetic, triumphant, organic, honest. And also galloping, blazing and murdering. Just real riffs, the way riffs should be written. Some will reappear in your head the next day, some will smash you right away. Some will be a mystery for a while, like the blasting riff at the beginning of 'Vainajain Valot' that only becomes clear at the end of the song, because at the beginning it was almost silenced by the blastbeat. Some will make you want to raise your hands and cheer, like the headbanger part after the clean guitar break in 'Myrkskynkutsuja'. Some melodies are triumphant, some poignant, some only obvious if you pay attention, and solos are sometimes thrown in even where a normal band would go lazy. But Havukruunu don't do "normal" - or "lazy" for that matter. There's always something going on, be it an inspired bass line when you don't expect it, or a sound thrown in just to make things more serious.

And it's all good. At first, it's even scary, as you start liking Havukruunu too much and hoping they don't mess up and make a common mistake, such as a boring part after a good part. But, track after track, minute after minute, the suspicions disappear, and when the album ends, all doubts are over too. Because Havukruunu don't do "boring" either. And you can listen to it again without worrying about it. A few months after the release, I'm still listening to Kelle Surut Soi whenever I have an hour to spare.

The sound? Punchy and immersive, but a bit distant. You can hear everything, and that's already an accomplishment in itself. So, it's perfect for what it needs to be. If you hear someone playing Kelle Surut Soi in another room, you will probably get jealous. If you decide to reward yourself by turning off the lights and listening to it through your headphones, there will be nothing else, and you won't be able to think about anything but the music. Yes, it's that good. Get it.