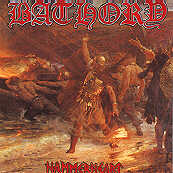 The calming, splashing waves of the ocean beat up against an isolated beachhead in northern Scandinavia... followed by nice acoustic interludes tangled with quiet chants and then rabid blasts into furious Viking riffs. Enter the world of “Hammerheart”.

Bathory’s second guise through out their doppelganger history has them madly swinging axes and brandishing war-hammers to majestic Viking melodies. Bathory started out playing an overly crude, but trademark wall of black metal sound. It was through their fourth album, “Blood Fire Death”, that Bathory initiated the beginnings of their trilogy of Viking masterpieces (culminating with “Twilight of the Gods”). “Hammerheart” is therefore the second working from the Viking phase, and Bathory’s finest hour in musical history. Bathory consists of Quorthon on vocals, electric and acoustic guitars and on sound effects, Vvornth doing drums and percussion stuff, whilst contributing to bass guitar duties is Kothaar.

“Hammerheart” can essentially be viewed as an album that is built around majestic Viking choirs, and simple, yet elegant guitar riffs. Based around extremely well driven lyrical concepts, some fiction, some maybe not. The closing track ‘One Rode to Asa Bay’, for instance deals with Christian invasion and occupation of the Viking lands of the North. “The God of almightyness Had arrived from a foreign land... Who had come from the other side Carry gold cross around neck in chain”. Lyrics such as these really help to convey how strong a story each of the songs tell. Incidentally, this album was said to be recorded in a garage, and for 1990 the production is pretty damn good.

“Hammerheart” contains elements that many bands today lack... soul, real soul. Bathory dug up their ideas from the heart, and focused their thoughts in creative and innovative music. Nothing will ever replicate that. ‘One Rode to Asa Bay’ is true genius, splendid, dazzling, grand, moving, exalted and any other adjective you want to throw in. From the galloping of horses to the simple tweeting of birds on the fly, to the heartfelt lyrics of the Christian invasion, to the lovely background of expertly struck guitar chords, to the cry of the church bell and epic Viking choirs. This is the song that makes the hairs on the back of your neck stand up (and at over ten minutes long, you know the moments won’t be fleeting to quickly).

Favoured tracks for me are zip, zilch or none. All perfect, maybe (not surprisingly) ‘One Rode to Asa Bay’ gets the slight nod ahead, probably more for it being the closer of the album, and thus sticking in your head that bit longer, plus it kicks donkey ass. I really can’t do any more to convey to you budding metal collectors out there, how much you NEED this album in your collection, it’s timeless. Please buy it. Do yourself a favor.

Bottom Line: Most should already own this classic masterpiece, the only thing lacking at all on this album is the production (and that is only slight fuzziness and distortion). Essential...the pioneers of the Viking metal ballad. ‘Nuff said.