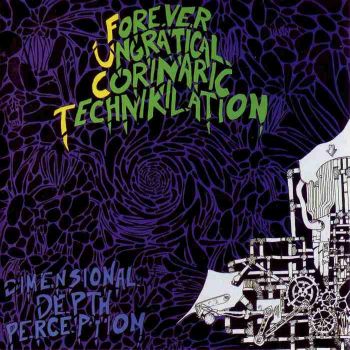 Recently I've been delving into old thrash bands that came late for the party, acts that came crawling out of the woodwork at a time when thrash had its biggest successes well behind it. A lot of those releases from the early 90's failed to make any impact because of the changing musical landscape: death metal had surpassed thrash in aggression and speed with grunge beginning to stir its head, about to deal a near-lethal blow to 80's metal culture. That doesn't mean that these releases aren't worth the effort to check them out, there are quite some hidden gems to be found in the deluge of releases from back then. On the other hand, you also have those releases where it's painfully clear why they failed to do much and unfortunately that's where F.U.C.T.'s debut full length comes in.

You can't put any blame for this at the music itself. Their style is best compared to what their contemporaries like The Accüsed, Suicidal Tendencies or D.R.I. were doing at the end of the 80's. Their songs effortlessly maneuver from heavy groovier parts to faster up-tempo stuff with ease and it's clear as day that the band are no amateurs when it comes to their instruments. They showcase a high level of musicianship in songs that are well structured and pull you into a trip down that lane where all your favorite old school thrash/hardcore/crossover bands have taken residence. A great production job gives the music a great beefy overall sound and is a pretty heavy affair for that time. It actually amazes me that they sound so good for such an obscure act from 30 years ago, I've heard way worse from that time frame. Special mention goes to the cool "Curse the Gods" (by Germany's Destruction) knock-off riff that starts this album. Nice detail, guys!

"Then why the meager score for this album?", you might ask yourself. Well I'll tell you: as much as I enjoy their music, F.U.C.T.'s vocalist simply can't sing for shit. And the worst part is this: it's not that the guy isn't trying, I have the feeling he's giving it his all, but he just cannot sing. He delivers his lines in a gruff semi-spoken style that half the time sounds kinda forced, and this isn't helped either by the fact that the vocals are pretty up front of the mix. After repeated listens I got somewhat used to his style, but it still sounds kinda weird.

It's clear why this never went far. They certainly had the chops; the album sounds excellent and if they would've had a different vocalist this could have been something. Not that they would've reached the same level of popularity as D.R.I. or Suicidal, for that they came in too late, but they could've certainly been a cult act.

I'd recommend this to those who just can't get enough of obscure thrash from back in the day. It has some killer music going and if you can put aside the peculiar vocals, then this is certainly worthy of your attention.