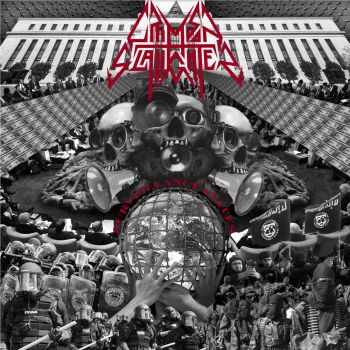 I came across this band on YouTube and got intrigued by the Terrorizer-ish cover art as well as the cool band name. I was expecting the same cookie-cutter stuff that a lot of these neo thrashers seem to produce, but that turned out pretty different. I am actually really impressed by this band. I'm not going to claim that this is the most original band in this new wave of thrash metal, they aren't, but the energy they have on offer and the way they combine their influences is nothing short of awesome, refreshing even.

I find it somewhat difficult to describe them. Think of "Coma of Souls" era Kreator meets Nuclear Assault meets Dark Angel, but there is also the influence of death/thrash titans like Devastation (the ones that released "Signs of Life" and "Idolatry"), Demolition Hammer and "Human" era Death that makes an appearance. In the remorseless and energetic delivery of the music the specter of Hypnosia and Dead Head shines through and Victor Sanchez' rapid fire vocal delivery has me thinking of Ron Rhineheart's performance on the Dark Angel "Leave Scars" album. The band as a whole is a technically proficient machine and the individual members are utterly skilled musicians. They execute the fast music with conviction and competence, and they do it in a manner that, at times, brings to mind more technical, progressive bands like Watchtower and Vektor. The songs move along at break-neck speed, but the band has built in the necessary breaks and leads to provide needed variation. And just at that moment you thought they couldn't go faster, the track 'P.O.A.L.' comes along. With its full-on death/grind middle section in the style of Lock Up they land an extra slap in the already sore face of the listener. This is without a doubt one of the most intense thrash album I have ever heard, a right savage beating of intensity.

There isn't much to complain about here but there is a minor point I'd like to make. The album lasts for 48 minutes and during that time the band keeps it all primarily fast and intense and towards the end the band's approach to their art starts to blunt itself somewhat. Perhaps it could've been a good idea to "trim the fat" here and there, because 48 minutes of savagery of this kind is perhaps a bit too long to keep interesting throughout.

In my opinion Surveillance States is one of the best albums coming from the contemporary thrash metal wave and I recommend this to everyone who is seriously into the style. Its power, aggression and intensity are something I seldom hear with other bands in their scene, who seem content to simply ape what their predecessors did before. That's why it's such a bleeding shame that Crimson Slaughter have decided to split up. This whole neo thrash thing could've used a band like them.