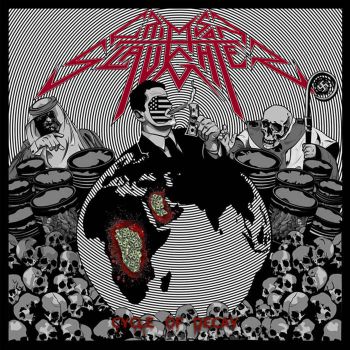 Thrash metal. Did I ever use these two words in one of my reviews before? I did so? Okay, but I am sorry, I have to do it again. Crimson Slaughter from Spain call for the next thrashing attack. The band prefers the old - and, from my point of view, the true - approach of the sub-genre. Nevertheless, although the artists like to take a trip into the past, let us speculate how future generations will judge this work.

In all fairness, our descendants will not say that Crimson Slaughter released the metallic highlight of 2016. They will additionally say that the band did not surprise the audience with highly original sounds. Although there is no obvious role model like Exodus, Slayer or Testament, the four Spanish ruffians do not desperately seek for new gimmicks in order to enrich their music. (Well, we all know this kind of enrichment - in most cases, it is just crap.) No, Crimson Slaughter are loyal to the initial movement of American thrash metal and its musical ideas from the mid-eighties, even if the first seconds of "Dead Walk Away" reminds me of early Kreator. Their no-frills approach is full of energy, straightforward, but not simple and equipped with the necessary degree of rawness, brutality and pressure. Of course, the full sound of Cycle of Decay is a valuable asset that helps the songs to develop their entire strengths. Just concentrate on the clear, sharp and vigorous appearance of the rasping guitars. Yet the compositions themselves are also well done, even though there is room for improvement in terms of catchiness and coherence. Especially a few solos are going nowhere. But come on, we are talking about debutants.

Future generations will also realize that lead vocalist Víctor Sánchez cannot challenge the charismatic singers of the first wave of thrash. His screams and shouts are powerful, but they lack an individual note. Some gang shouts or extremely distorted voices support him more or less successfully, but to be honest: this is no mind-blowing vocal performance. Nevertheless, Victor's style increases the level of energy and that's naturally a good thing. The high speed that dominates the album asks for a fidgety singer and he fulfils this request. Mind-blowing sequences like the beginning of 'Kill or Be Killed' are based on the explosive guitar work, but also on his screams. Leaving these details aside, the entire track belongs to the highlights of the album. It is on a par with 'Buried Beneath The State' which offers some exciting guitar leads. In particular the second part of the verse has a very good flow.

Viewed overall, the generations of our children and grandchildren will probably say it is no wonder that Cycle of Decay did not become a classic. Yet, and I hope that the album does not fall into oblivion, they will also say that the sawing guitars, the robust drumming and the pretty mature execution of the songs in general ensure a nice listening session. Indeed, I guess they will like this album - regardless of the then current products. And by the way, who knows how thrash metal will sound in 2035? Maybe some progressive "thrashers" have started to mix once sharp guitars with an overdose of flutes and harps? Or every thrash band that wants to be taken seriously must have an accordionist in its line-up? Or a hip-hop mix of "Angel of Death" is the new big thing? Nightmarish visions! Yes, the more I think about it, I am sure. Future generations will enjoy Cycle of Decay.