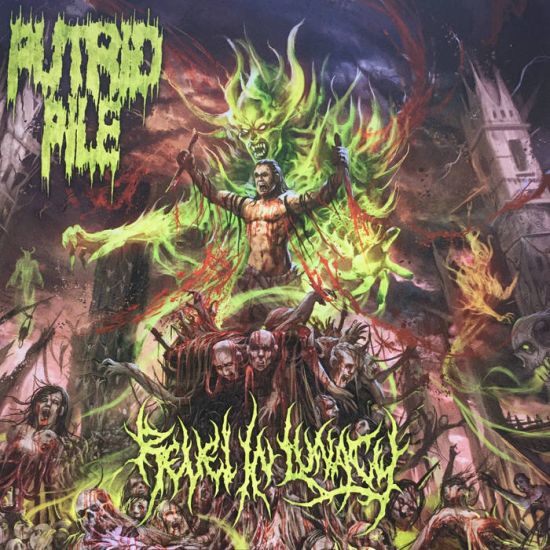 Type: Full-Length
Release Date: May 11th, 2020
Label: Sevared Records
Genre: Brutal, Death
1 Death Waits For No One
2 Devilish
3 Gore And More
4 Savage Lust For Blood
5 Cunt Kebab
6 Bonedigger
7 Fit Subject For A Murder
8 Half-Ghoul
9 Starving For Your Blood
10 No Rest For The Wicked
11 I'd Rather Have You Dead

You hear it uttered left, right and center: 2020 is already the worst year ever according to a lot of people. I can see where they are coming from, and the reasons why are clear to everyone who hasn't been living under a rock these past months. But I'm not ready to write off the year completely though, and the reason is this: it has been a great year for metal releases so far. We have been blessed with awesome releases by the likes of Perdition Temple, Funeralopolis, Blasphamagoatachrist, Slaughter Messiah and Violent Hammer and new albums by Deathstorm, Venomous Concept and Voracious Scourge are coming in the near future. So, it was just natural that I was happy to see that my favorite brutal death metal one man army Putrid Pile has joined in the fun with a new full length.

And it sounds exactly as you would expect a Putrid Pile album to sound. As always the music is executed with precision and the song writing is well thought out. The individual tracks are packed with variation and brutality. Tempo changes and breaks are constructed into brutal death metal tracks that hook themselves into the listeners brain after just a few spins and subtle details are woven into the individual tracks as well. Good examples of this are the haunting guitar melody that runs through part of 'Gore and More', the punkish riff in 'Savage Lust for Blood' and the searing leads that occasionally pop up throughout. And there's even more subtleties that pop up after repeated listens: a hint of black metal dissonance in 'Bonedigger' and a nod to Devourment at the start of 'Starving for Your Blood'. And is that "Covenant" era Morbid Angel in the beginning of 'No Rest for the Wicked'? All of this greatness is held together by Shaun's belligerent vocals and a stellar production job.

There is only one point of critique I have and that is that the percussion sounds a tad more clinical than I'm used to from Putrid Pile. Whenever there's a fill, it kinda sounds like the cd is skipping. Other than that, this is another awesome release by Shaun LaCanne, a man who seems to be simply incapable of disappointing me.