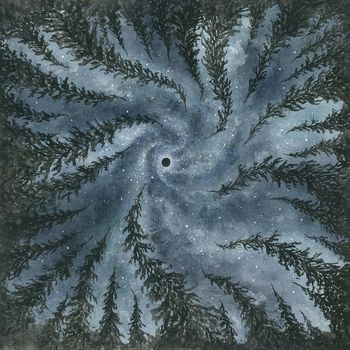 Vast and desolate cosmic landscapes that conjure darkness is what Mesarthim seem to be all about. This atmospheric black metal band is fuzzing harsh sounds with electronic/trance vibes in a primordial soup of existential cosmic concepts. I'm definitely out of my comfort zone here due to the contemplative and experimental approach (electro sounds). Mesarthim takes in their latest album called The Degenerate Era. I also have to say that this is my first time listening to this Australian band and it was a bittersweet experience indeed. What attracted me towards this album and band was the cover art that depicts a bucolic yet dark cosmic landscape; something a'la Lovecraft but more naturalistic. And that’s also the description of this band's music; mysterious and cryptic but at the same time accessible as well as experimental. I think these guys relied too much on the synths/keyboards and left behind the organic sound imprinted in black metal. It sounds watered-down and for most of the album plastic and boring.

The album starts with 'Laniakea' which is divided into Part 1 'The Great Attractor', Part 2 'The Zone of Avoidance' and Part 3 'Dark Energy'. This song transmits beautiful yet eerie atmospheres with surprisingly outstanding electronic sprinkles here and there. 'Laniakea' evokes melancholic existential desperation but contradictorily it sounds uplifting and kind of happy for an atmospheric black metal band. Then, by the end of the track, the vocals kick off with anti-human wrath and loath for all terrestrial beings. This is the longest track in the record and it didn't hook me; it rather made me doubt continuing with the listen. It was a little bit disappointing but I gave it a try to see if it got better. There are some contemplative evocations but there are also aggressive moments loyal to the core of the black metal style. Again, the driving force is the melodies created by the synths.

Then, you have the self-titled track, 'The Degenerate Era'. This song connects smoothly with the previous one and also starts building some eerie atmosphere mixed with doomy parts that makes this piece more interesting than 'Laniakea' in the way that it leads you to something more concrete and less abstract. I know that the whole idea of the record is to transport you into the vastness of space and make you float but I felt more down to earth during the execution of this song. The vocal parts were more generous as well but the best thing was the guitar solo by the end, melodic and well written. However, something that I hated through this song and the whole album was the drumming. I mean, those were awful sounding programmed as hell and fake drums.

After the two first songs, there was not much to say. Next, 'Time Domain' which mixes the electronic passages with atmospheric parts that summon a bodiless experience. Mesarthim's music is ethereal, cryptically beautiful, and cold as the depths of space. Nevertheless, it also sounded very plastic and inorganic, taking too many influences from music programming, and in my opinion that fact ruins the experience big time. The album seems to be connected with a common thread of invisible filaments that end up in a well-written piece of music, the production fits just right into the band's concepts and ideas but lacks the human touch in the rhythmic section. The driving force that moves the album is the keyboards with atmospheric dark melodies and that navigate towards the unknown horizons of vast cosmic seas. You can evidence it during the last two songs called 'Paradox' and '618'.

The lyrical concept of The Degenerate Era focuses on the fact that the destiny of the universe is to be reigned by darkness and emptiness, all stars and celestial bodies in the universe are the prospect to perish. So, the only remnants will be the cosmic corpses of black holes. The night sky we see today will no longer exist, instead replaced by one with fewer and markedly dimmer stars. This concept is quite interesting but also depressing, it caught my attention because the band stays away from occult and satanic esthetics that tend to be cliché in the sub-genre. Embracing instead a much darker and real theme, the destiny of our universe, which is obscure and fits like a glove with the cover art and music the band plays mostly. However, all the “complex” concept becomes just a gimmick if the music is not compelling and that’s the case here with The Degenerate Era.

Wrapping up, I have to confess that atmospheric/ambient black metal bands tend to be dull and boring and I stick more to the aggressive and traditional black metal standards. Although the album did not quite convince me or motivated me to continue digging into the rest of the band's discography, it wasn't as bad as I thought. This music tends to work for specific moods and tastes, so, if you are a fan of bands that are not afraid to experiment a little bit with electronic elements, go ahead. However, if you are a traditional headbanger the experience with Mesarthim's music will be awful because the drums and in general the rhythmic sections are overly produced and programmed. Concept wise it works for me but the music tends to be painfully boring because the band builds too much and ends up in nothing transcendental at all. At the end, it is as if a techno band likes atmospheric black metal not the opposite.