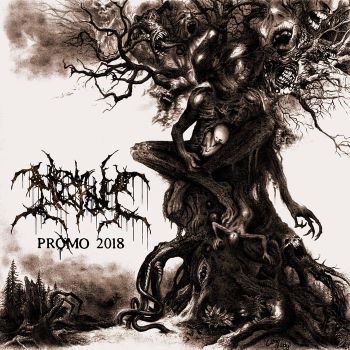 I don't know a lot of Turkish metal bands: the only ones popping into my mind at the moment are Decaying Purity, Hellsodomy, Cenotaph and some of Cenotaph's vocalist Batu Çetin's side bands. I am happy to be able to report that I can add a name to that short list and that is that of death metal powerhouse Meshum. And without a doubt it is an impressive one at that!

Over 2 tracks this one-man panzer division of death crushes the competition with ease. Heavy as a busload of fat grannies and as aggressive as a psychotic meth addict, sole member Erkin Öztürk crushes the listener with a raging blast of brutal death metal mayhem in the vein of Brodequin, Devourment and Perverted Dexterity. Machine gun drumming collides with the furious riffing, creating a maelstrom of frantic death metal, with the gurgling vocals deliciously smeared on top. Some short slow pummeling sections are built in to ensure some variation, but without sacrificing the relentless attack of the music. Add to this a crushing production and you have your dose of raging brutality right there.

Detractors could of course say that Meshum's deal sounds exactly like heaps of other BDM acts out there, and that it all sounds like the same song. I can understand that in some way: you could fuse the 2 songs on this cd together and you would scarcely notice. But then again, this is brutal fucking death metal, not Dream Theater. When it's played with the kind of energy and conviction as Meshum does, what the fuck is the problem? This is Brutal Death Metal Supremacy, so go fuck yourself !!!