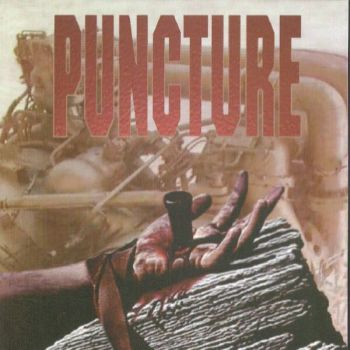 Industrial metal, how much more 90's can you get without bringing Fred Durst into the equation? The late 80's and early to mid 90's saw quite a lot of these bands emerging, fusing metal riffing to pounding drum machine rhythms and samples. Both the US and the UK had their kind of style, with the English acts tending towards the groundwork laid out by the mighty Godflesh and their US counterparts usually taking their cues more from NIN and Ministry. There are exceptions of course, Skin Chamber, Soulstorm (I know, I know, they're Canadian, but you get the point) and this here Puncture.

Puncture offer up some pounding industrial metal on their debut album, but the influence of US leading lights like the aforementioned NIN and Ministry only shines through occasionally. The basis for the music is, again, Godflesh but Puncture takes this and runs with it, adding a lot more other ingredients to the pretty volatile mix. On top of the death metal riffing and the barked vocals the band sprinkles the influence of industrial originators like Front Line Assembly and Skinny Puppy. Weird sounds and sampled spoken word passages are interwoven throughout the album, setting a menacing atmosphere.

The band has managed to craft their songs in a way that each track has a face of it's own without making the album sound like a compilation record. From the Voivod riffing in 'Nailed to a Cross' and 'American Dream', the Front Line Assembly stomp in 'Youth gone Mild' and the EBM/rave intro to 'Procession', each track has something to distinguish it from the other. And boy, did somebody really like the Public Enemy album "It Takes a Nation of Millions ..." because I heard different samples off of it throughout. All their influences come together in a solid frame of drum machine driven Godflesh-isms and in their heavier moments Puncture also brings to mind the first Fear Factory album as well as Meathook Seed's debut. This is solid and varied industrial metal from a band that perhaps deserves more recognition than it gets.

If I have to make a point of critique it is that the album lasts a bit too long. Perhaps the band could have left off a track like 'Craft' that lasts too long and isn't such an interesting song either. With music that aims for relentless intensity like this, it's probably a good idea to keep it short and focused. Other than that, this is a remorseless piece of death-infused industrial hostility sure to please those into acts like Skrew, G.G.F.H., mid 90's Front Line Assembly and Sonic Violence.