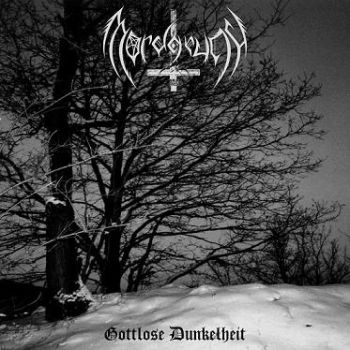 17 years ago, the German underground unit called Mordgrund released 300 copies of this 7”. I am happy that No. 174 leads a comfortable life while having a safe place on my shelf, only interrupted by an excursion to my turntable every now and then. Both 'Gottlose Dunkelheit' and 'Sehnsucht nach Ewigkeit' deliver generic black metal with a pretty complex and multi-layered song structure. Whirring guitars with a harsh basic tone form cold and lightless leads that dominate the sound of this vinyl. Neither the raw vocals nor the varied drumming can challenge the guitars. Especially the voice does not have adequate space. However, this blemish can be ignored, because underground productions do not suffer from imperfection – quite the opposite. In particular their little weaknesses give them their special charm, not always, but sometimes.

The here reviewed single with its wintery, stylish artwork is one of the pretty charming releases. The songs do not fall victim to a lack of substance. Instead, they are meticulously designed, energetic and uncover a surprising maturity for a then new band. Influences of the well-known role models are more or less a matter of course. The rolling leads of Darkthrone and the spooky atmosphere of early Mayhem are ingredients Mordgrund don’t want to miss in their own sound. They also master the art of creating minimal melodies that rather spread demonic vibes than pleasant harmonies. Thus, only a very small number of sequences is at risk to go nowhere. Usually, the formation stays on target. Summing up one can say that the cleverly and variedly arranged tracks avoid repetitiveness and boredom successfully.

Mordgrund’s last output - their only full-length - dates from 2010. From this follows that I am sceptical whether or not the band still exists. Moreover, it will probably be difficult to find a copy of Gottlose Dunkelheit to buy. Nonetheless, if you are interested in typical, manually crafted Northern black metal, you should try to get in touch with this release and / or Mordgrund in general.