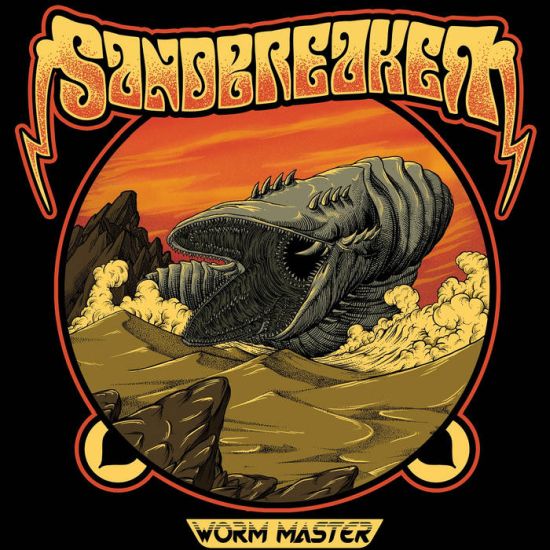 Sandbreaker impressed lots of folks with their self titled debut EP in 2019, it displayed the band's intent in making a slightly loose form of stoner doom with death metal influences. Majority of that EP walked a fairly straight line in terms of death/doom even though the stoner metal mannerisms would appear frequently. In 2020 however, they have managed to release a matured full-length amidst the shitstorm of things, titled Worm Master. This album came as a surprise to me, I didn't think the Polish ploughers would have a crop ready for us so soon, however, it's here and damn is it one tasty reap.

Sandbreaker was a very well written and assembled album, Worm Master is all that Sandbreaker was and more. Firstly it seems their sound has gotten even heavier than before hence the addition of the new guitarist to the lineup. New-comer Krzysztof Całka along with Bartłomiej Czech arrive as ready and more than competent craftsmen for the job at hand. Thus said, they not only deliver on what's expected of them, but they add a more definite layer of musicianship. As time would pass-by with the opening song 'Upside Down World' ideally setting the stage, you'd begin to notice there's much more of an adventurous overtone working. The guitars are spacy and sound more atmospheric than on their debut EP. This bit of growth is good to see as it shows that Sandbreaker are definitely not afraid to progress respectfully with their sound. This element goes well with the bouldering basslines of Arkadiusz Dzierżawa and the monstrous growls and ominous thumps of Mirosław Cichy. Altogether creating a truly cohesive bit of music that envelops you slowly as you listen to tracks like the terrifying 'Navigator Lost' and 'Aqua Karma'. Also its great to hear those sprawling, deserted rock and roll guitar solos laid-down, they expand the feel of the tunes and really add to the experience of listening to Worm Master.

I can hear a bit of Ahab and Black Hole (Italy) particularly in the drumming, riffing and placement of those abyss-dwelling vocals on songs such as 'Golden Path (Metamorphosis)' and self titled track 'Worm Master' though being shy of deep melody. Thus, if Sandbreaker should double-down on the melody I think they would be even more effective as a unit playing stoner/death/doom. The production brings together all of the components of their atmospheric doomed out stoner death metal with nothing appearing to be too dominant. The best moments are made noticeable, which I would say are the swelling, sloth-like guitar solos and again the vocal malevolence of Doombardier. The artwork matches what I hear on the record and elevates the obscurity of where Sandbreaker as a band may be heading next as it appears to be drawn from the similar artistic concept behind their debut EP.

I hope Sandbreaker are able to further explore and take their music to greater heights with each following release. As for now I can honestly say that Worm Master is a commendable bit of growth demonstrated by the band, hopefully to continue their journey.