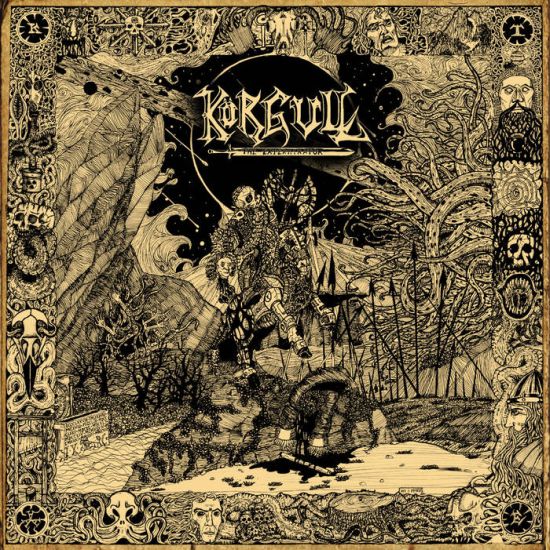 Körgull the Exterminator… well, what can I say? Since their very first steps, the musicians under this banner wrote songs that embodied pure bestiality, hatred, rudeness and, last but not least, an omnipresent “f**k you” attitude. Their blackened thrash inferno has always been the polar opposite of clemency, mildness and radio-friendly music. And if we can believe in the song titles of Sharpen Your Spikes, we can be sure that KtE still sounds black. We receive the 'Prophecy of Black Blood', visit 'The Black Goat of the Woods' and learn that 'A Black Bird Is Always a Warning'. More blackness is forbidden. But can we really trust these song names?

Obama said: yes, we can. I agree in this case. KtE haven’t changed their way of proceeding. A rolling thunder of thrashing riffs, vehement drumming and a voice that reminds of Sabina Classen’s most toxic days convert my cosy living room to a sonic battlefield. I freely admit that the stage-setting intro sounds like the beginning of a ballad of Blackie (!) Lawless (I nearly hear him lamenting “where is the lo-ove?”), but that’s just the calm before the storm. Snot meets inferno as soon as the first regular track (and simultaneously the first highlight) sets in. Lilith, the only female survivor after the departure of Steel Maniac in 2013, negates all of her feminine charms and her rude performance does not only re-vitalize the spirit of Wendy O. Williams. It also motivates the male part of the Spanish team to extraordinary dedication. Therefore swirling guitars clear a path through the jungle of mainstream music which has been so meticulously treated with pesticides. Moreover, some compositions possess a fascinating element of hellish catchiness. The guitar leads and the chorus of the title track find their way into my long-term memory very quickly – and that’s just one example.

Yet it is a matter of course that Sharpen Your Spikes has other dominating traits than catchiness. The aforementioned black goat, for instance, has probably been a bulldozer in a previous life. However, no challenge is too big for this squadron. No matter how dry the ground is, the relentless quintet ploughs through it with great ease. And it is not only 'The Black Goat of the Woods' which shows that an extra dose of malicious heaviness and the temporary neglect of ultra-fast rhythms can go hand in hand. This does not mean that KtE dish up doomy sections, but Lady Necrobitch and the boys know the power of a precisely killing mid-tempo part very well. Moreover, they love to come to the point directly. Tracks like the straight, murderous and sharp 'Battle Ram' have no single gram of fat. They just split skulls with great ease, the more the better – and the fury they reflect is simply impressive. Okay, maybe it is true that KtE slightly run out of breath during the (still strong) closer, which almost sounds like a Desaster song with “medieval” melodies. In addition, it might be true that one could optimize one or two further pieces. But to speak about these details would be small-minded and petty in view of the overall quality of this output. Instead, enjoy this feast of howling guitars or collapse and let yourself re-animate softly by “real heavy music”, for example Accept’s “Metal Heart” or comparable shit.

Last but not least, the production must be mentioned. In short: excellent. It develops a gargantuan power and proves evidence that transparency and dirt do not exclude each other. The mix of Sharpen Your Spikes is a demonstration of fierce power and it gives the already breath-taking songs the final touch. Enough written. This album with its perfect centre consisting of the title track, 'Battle Ram' and 'The Black Goat of the Woods' is nothing less than a must-have for all those who love structured noise. No doubt, we can trust in the song titles I mentioned at the end of the first paragraph. They do not promise too much, albeit the almost poetic name 'A Black Bird Is Always a Warning' can lead the audience on a wrong track. Körgull the Exterminator are neither sensitive nor poetic – but they are stronger than ever and they are back… in black.