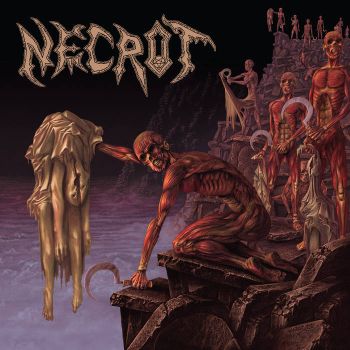 Necrot's 2017 full length Blood Offerings debut didn't gain my attention as it did others within the underground. I think that's partly due to the amount of high quality releases charting at the time. They're not the only band I overlooked at the time, I remember Phrenelith getting many positive mentions for "Desolate Endscape", but never seemed to sound off on my radar as I was far too absorbed in "Eroded Corridors of Unbeing". Thus said, having lost track of Necrot for the most part, the announcement of Mortal, the band's follow up to Blood Offerings, came as a big surprise. In retrospect, perhaps not lending much time to Blood Offerings strongly impacted my taste developed for Mortal following countless sessions spent with the record.

That said, I didn't know what to expect heading into Necrot's sophomore full length; however, the cover artwork somewhat built my expectations that steadily developed into a reality. 'Your Hell' is my heaven and perhaps the heaven of many others that admire death metal. One of the strongest songs off Mortal is introduced as an opener, believe it or not. This is the sort of track any other band would have placed lower in the tracklisting for the sake of keeping the listener awake, provided how challenging countless bands find sustaining a listener's undivided attention for 30+ minutes can be. In Necrot's case, the guys give us a banger of a beginner due to how confident they are with the guts and tail end of Mortal. They've got the licks, the vocal bruises, the drumming distinction, the production and the know-how when it comes time to assemble it all.

Hope you were able to ride along the entrails of 'Your Hell' because 'Dying Life' will require more stamina and momentum if you're serious about keeping up. The pacing is turned up a bit, the riffs defeat those of 'Your Hell' and the drumming provides the stomping follow-through with tight double bass kicking and fluent transitions to diverse rhythms. 'Stench of Decay' pretty-much continues where 'Dying Life' concluded with yet another savage raise in speed. The syncopation is toned-down a tad bit here for more of a consistent headbanging effect.

Each song shows off its strength that translates to the musical understanding of Necrot's members. Sometimes very unpredictable like the break from the main riff in 'Asleep Forever' that succeeds a sweet twin-guitar version of the primary lead supported by one hell of a guitar solo or very candid such as aforementioned 'Stench of Decay'. Either way the songs coalesce exceptionally making every moment a memorable one deserving a revisit.

Yea, Mortal sounds like 3 years in the making. The way Necrot are able to pick out what works and implement it into their tunes gives one the impression of a studious, death metal savvy, long-vision kind of band. Songs sound affirmative, positive about its direction and route, with all elements smoothly falling into place. You barely even notice the moment 'Sinister Will' enters the equation that takes further a foot plummeted in riffing supremacy by arming the strings with a technical death metal firework of sorts and towards the end a groovy black metal-esque lead. That's the repeating factor about Mortal, the album refrains from repetition, instead always finding suitable sections to match the main riffs providing each song with a distinct characteristic.

Its hard to select a favorite off Mortal, so I won't; however, what I can do is list some highlights you may want to check out though I strongly recommend you listen to the album in its entirety for maximum effect. 'Your Hell', 'Sinister Will' and 'Malevolent Intentions' should suffice if you were just seeking justification. But if you already are familiar with Necrot, then head face-first into the pit.

Mortal as a new title under Necrot's belt outperforms Blood Offerings easily, it's no contest, no squabble, no locking of horns between the two to be honest; hence, their be no need to worry for anyone familiar with the band, what you get here eclipses anything Necrot has ever done.

The late 2010's have been hailed as the "old school death metal revival" period and indeed, many bands have come out of the woodwork to lay claim to that movement. Some have used the “old school” sound of death metal as a springboard to breathe new life into the subgenre through experimenting and genre mixing, other sought to bring back that classic sound as it was but with a modern shin and twist, and today we have Necrot out of California returning to the spotlight with their sophomore record, simply titled Mortal.

Necrot are definitely no strangers when it comes to the crop of death metal revivalists, their early demos and debut LP Blood Offerings were worthy releases, and deserving of praise. Blood Offerings in particular was a major stand out from the other revivalist bands, the band displayed the mandatory checkboxes of death metal speed and brutality, but with a modern production and a bit of a twist in the compositions, as the band displayed a clear leaning into thrash metal through their guitar work, and for Mortal the band has doubled down on that thrash metal appreciation. Mortal is much heavier and more technical than its predecessor in every aspect, the band even subtly displays a black metal influence in the vocals of bassist Luca Indrio, his growls are much more bellowing and have a echoing effect that adds to the album’s brutal atmosphere. Another exciting aspect of this new LP is how the band are able to incorporate more influences from doom and classic heavy metal into the death metal sound they crystalized in their debut record, it’s a natural evolution from that album’s sound and style while also exploring different soundscapes.

The main standout continues to be the guitar work of Sonny Reinhardt and drummer Chad Gailey. The former has evolved from the “straight-to-the-jugular” approach of a main riff with specific variations throughout the song and solos, the guitar work is much more complex and sprawling, one song can feature two or even more riffs and the solos are also longer and more technical. Drumming is also equally refined and polished, aside from the speed and intensity, drumming has rhythm and a continuous momentum that’s never lost, both of these performances alongside the vocals and bass combined is where the band fully embrace their thrash influence. In songs like 'Asleep Forever', and 'Stench of Decay' display that balance of death metal musical aesthetics and groundwork with the technicality and layers of classic thrash metal like early Metallica and Megadeth in their heyday, and the band also ventures into death-doom atmospherics as shown in tracks like 'Sinister Will' and the monumental closing title track. That last track is also where the band display every single aspect of the album and it's both a grand finale and a perfect encapsulation of the record as a whole. And what’s most impressive is how the band were able to compose the album in a way where each track leads to the next without feeling like an abrupt change of pace.

However, while the band successfully refined their sound and filled in the gaps from the previous album, they still haven’t completely manage to sand off those rough edges. On repeated listening album can be somewhat homogenous as the overall style is kept uniform from beginning to end, that being said this is still a triumph for the band and a masterclass death metal record that mixes several elements to its full advantage. If the 2020’s mark the end of this “old school” death metal renaissance, Necrot more than can keep marching on and have displayed their continued evolution and development rather nicely.