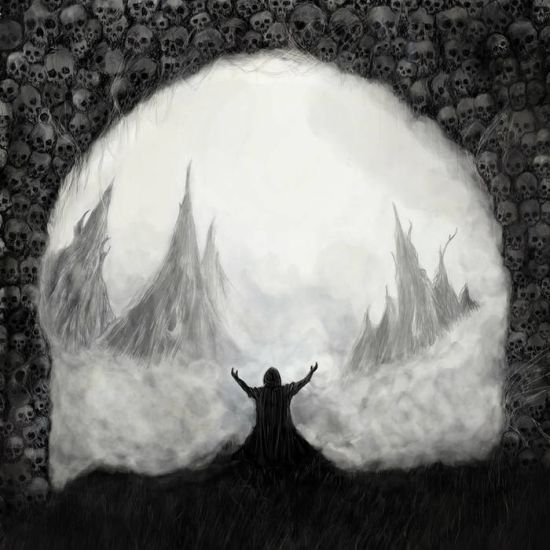 Coming from Prague, Czechia Voluptas strikes the catacombs of the underground with their debut full-length called Towards The Great White Nothing. Influenced by a bunch of different music genres and ideas, Voluptas, walks the thin line of traditional black metal sound and an experimental-adventurous trip; mixing sub-genres in a blender of dark psychedelia.

On one hand, the black metal innuendos that Voluptas uses to hit you in the face are the typical ones. For instance, fast tempos, shrieking vocal style, tremolo picking guitars, and some traces of raw/lo-fi production and recording values. What I mean by “some traces” of raw/lo-fi production in the album is that it is not as dirty sounding as other so-called “Trve Kvlt” bands. The black metal parts shown in the opening track 'Crystalline Key' successfully transmit an old school feeling of coldness and grimness in the European vein of bands like Darkthrone and early Ulver.

On the other hand, certain elements are more distinctive from doom bands. Slow chugs and crushing atmospheres. However, those mentioned elements are rather sporadic. For example, in the song, 'Thargelia' Voluptas briefly transforms into a doom band, showing low guttural vocals, dense guitar arpeggios, and an awe-inspiring atmosphere. Subsequently, the band comes back to their original black metal mode, leaving you hungry for more doom inspired passages. Towards The Great White Nothing sounds dark and dismal in general but the doom parts are just sprinkled here and there. The third song named 'Of Gnosis and Agony' changes gears into a more rhythmic, psychedelic, and punky approach. Nevertheless, the rawness of their sound prevails and serves as a common thread between the best of both worlds (traditional and experimental metal).

Then, 'Between Terror and Erebus' returns into the cold Norwegian forests of tremolo picking, raspy vocals, and blast-beats. The closing track 'Desert Twilight' takes from Norway to the Middle East in just seconds. The song starts with some psychedelic Eastern guitar chords that are hypnotic and repetitive, almost like getting you into a trance. Only to be interrupted by the deep gutturals of the singer that lead the song in a different direction again, they have summoned the doom again (just for few seconds but it was glorious). Ok, another shift of sound; now into some tasty black cold and eerie metal. I think this song was perfect to close the record because it mingles all the influences Voluptas brings to the table. The song is a 13 minutes trip into the main influences of the band and gives you a trip to the bowels of hell and back. They even included a saxophone by the end and some jazzy spooky sounds that seemed to go downwards into hell.

Coming back to the first paragraph, I think that Towards the Great White Nothing was a psychedelic trip of traditional black metal spiced up with some doom portions and freaky jazzy random noises. I appreciate the balls that these guys have to experiment with and let their influences take the lead of their music instead of just being a copycat band. However, I was begging for more doom passages to complement the obscurity of the record. The doom parts were rather limited to certain sections of the album and serve as an accessory instead of being more predominant. The same for the jazzy and spooky and experimental parts by the end of the record that even included a saxophone. This record positively surprised me and left me longing for more creative bands like Voluptas that separate themselves from the cattle of “Trve Kvlt” and dive into an adventurous approach. Recommended guys, go and check yourselves.