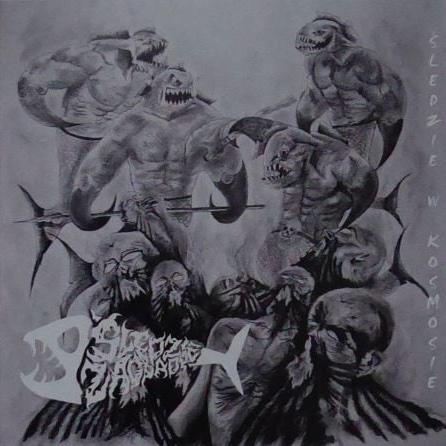 After several years of playing together and a few local concerts, four maniacs of strong sounds, fun and high-proof drinks followed with some herring decided to embody the repertoire created and played here and there. They embodied it on August 4th this year. The album features 11 pieces of lively grind core tinged with many influences and a large dose of humor.

Speaking of Śledzie Zagłady and grind core, it is as if we wanted to put Napalm Death's work into the same drawer. It is true that Śledzie achievements do not venture into industrial regions, but it's the early grind core activity of the Englishmen that is extremely close to them. It was reflected in the cover of ‘Unchallenged Hate’ from Napalms' second album. However, I must explain right away that this is the only track that maintains the grind core structure as a whole. All the other tracks are quite free play with musical styles from punk rock to black metal with a grind character. In terms of sound, I would place them in Scandinavia between the late Nasum and Rotten Sound.

In Śledzie's work, the lyrics that perfectly fit into this lively music are no less important. Here, however, it is worth adding a warning that playing Śledzie Zagłady's music in front of minors may result in too fast of a linguistic education in the backyard Latin regions. Unfortunately, or maybe for the better the book does not contain lyrics of individual songs, although it would be worth reading them to learn the stories of Onan, Rudy or King Edzio. The very title of Śledzie W Kosmosie indicates that this position should be approached with a grain of salt, preferably twice applied. It will be perfect for events strengthened with the high proof liquids and such. From my own experience, I can add that it is difficult to sit still at their concerts. After just a few sounds the leg taps, the head nods, and then it turns out that you are already jumping in front of the stage.

Ending my arguments, I would like to encourage all metalheads, who do not mind aggressive sounds while dancing, to reach for the debut of Śledzie Zagłady. This somewhat budget digipak, decorated with a cover by Marcin "Kryszpin", can turn out to be quite a useful gadget for both music and general entertainment.