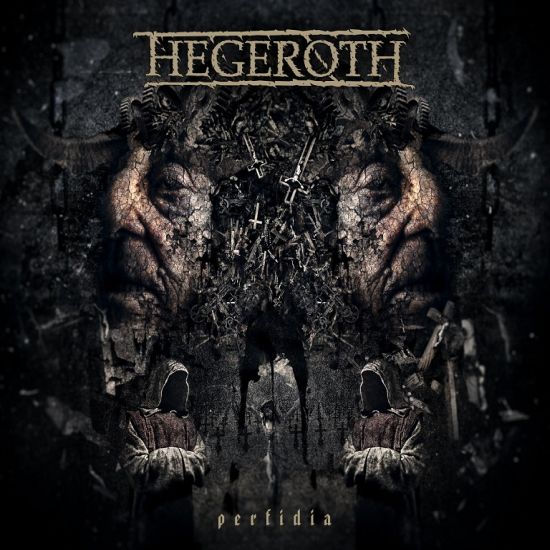 With the hype that the Polish extreme metal scene has had with bands such as Batushka and Mgła, it was only a matter of time before other Polish bands decided to step up their game and show they're capable of. Many have done it. Be it older bands like Black Altar, or newer bands, like the one I'm going to talk about today Hegeroth, which in 2020 released their third LP Perfidia.

In a nutshell, Hegeroth is a Polish black metal band that has had a semi consistent lineup with guitarist and bassist Bene, drummer and former vocalist Bila and returning vocalist Edward. A fun fact of this band is how both current and former members are involved in the bands HexHorn and Cult ov Mora. Musically and in their own words, Hegeroth are inspired by bands such as Dark Funeral and Emperor, which translates into a style of melodic black metal that relies on complex and fast riffs and of course melodies but in keeping with their Norwegian influences, the band's riffs are more hateful than somber. And indeed, the band's style is guitar driven. The wall of sound, dark melodies, cold riffs and also their solos, alongside the drumming which is primarily blast beat driven, and the shrieking vocals of Edward give it that distinct feel that people associate with "TRVE KVLT NORWEGIAN BLACK METAL", which is also the biggest issue with the album. The band are almost overzealous in paying their dues to the old masters, to the point where some of the songs sound very similar to one another, and it's very repetitive to a fault. The positive part is that the band are truly passionate about the genre, and you can hear that passion in everything, from the compositions to how tight and consistent the performances are, unfortunately it also leaves the band without a true sense of identity of their own.

That being said, despite the derivative nature of Hegeroth's chosen style, I'll be lying if I said it was bad, because it isn't. This trio out of Silesia are excellent musicians and that's this album's greatest strength. The compositions, derivative as they may be, are very well constructed and despite the length of the songs and overall briefness of the album, the band make the most out of it with their aforementioned riffs, blast beats and vocals and they've also added some subtle but forceful keyboards in tracks like 'Raise your Voice' which gives it an extra punch in the chorus. Another aspect which makes the album a good time is the production. When it comes to black metal, a cleaner production can work really well or really bad, but in the case of Hegeroth the polished production is what showcases how talented these 3 Poles are. All of their individual strengths and their efforts as a unit are highlighted in a very good way. The best and final bit of praise I can give is that while yes, the band is derivative and attached to the tried and true formula of black metal, this is a perfect entry level album for any uninitiated fan that wants to get into a black metal, as this album as a whole has a "best of black metal" feel to it.

Overall while Hegeroth aren't reinventing the wheel, they still succeed in making a nice record to play. Most seasoned metalheads will probably roll their eyes, but if you're new to black metal, give this a shot, as it will be a bridge that will take you to the abyss of the likes of Dark Funeral, Emperor, Old Man's Child and Naglfar. Given how this band also mentions those bands on their Bandcamp page, I'd say that they will certainly succeed in getting people into those bands.